Palm Sunday is a Christian moveable feast that falls on the Sunday before Easter. The feast commemorates Jesus’ triumphal entry into Jerusalem, an event mentioned in all four canonical Gospels. (Mark 11:1–11, Matthew 21:1–11, Luke 19:28–44, and John 12:12–19).

In many Christian churches, Palm Sunday is marked by the distribution of palm leaves (often tied into crosses) to the assembled worshipers. The difficulty of procuring palms for that day’s ceremonies in unfavorable climates for palms led to the substitution of boughs of box, yew, willow, or other native trees. The Sunday was often designated by the names of these trees, as Yew Sunday, or by the general term Branch Sunday. 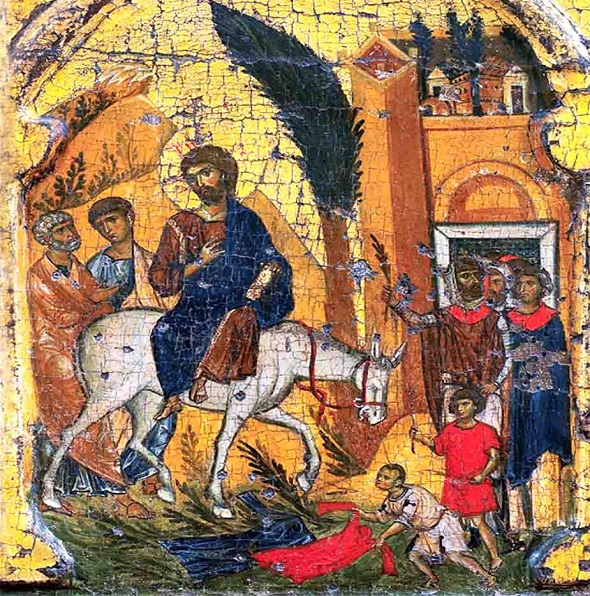 In the accounts of the four canonical Gospels, Jesus’ triumphal entry into Jerusalem takes place about a week before his Resurrection.

According to the Gospels, Jesus rode a donkey into Jerusalem, and the celebrating people there lay down their cloaks in front of him, and also lay down small branches of trees. The people sang part of Psalms 118: 25–26 – … Blessed is He who comes in the name of the Lord. We bless you from the house of the Lord .

The symbolism of the donkey may refer to the Eastern tradition that it is an animal of peace, versus the horse, which is the animal of war. Therefore, a king came riding upon a horse when he was bent on war and rode upon a donkey when he wanted to point out he was coming in peace. Therefore, Jesus’ entry to Jerusalem symbolized his entry as the Prince of Peace, not as a war-waging king.

In many lands in the ancient Near East, it was customary to cover in some way the path of someone thought worthy of the highest honour. The Hebrew Bible (2Kings 9:13) reports that Jehu, son of Jehoshaphat, was treated this way. Both the Synoptic Gospels and the Gospel of John report that people gave Jesus this form of honour. However, in the synoptics they are only reported as laying their garments and cut rushes on the street, whereas John more specifically mentions palm fronds. The palm branch was a symbol of triumph and victory in Jewish tradition, and is treated in other parts of the Bible as such (e.g., Leviticus 23:40 and Revelation 7:9). Because of this, the scene of the crowd greeting Jesus by waving palms and carpeting his path with them and their cloaks has become symbolic and important.

In the 16th and 17th centuries, Palm Sunday was marked by the burning of Jack-‘o’-Lent figures. This was a straw effigy which would be stoned and abused. Its burning on Palm Sunday was often supposed to be a kind of revenge on Judas Iscariot, who had betrayed Christ. It could also have represented the hated figure of Winter whose destruction prepares the way for Spring.

Western Christianity: Palm Sunday commemorates the triumphal entrance of Christ into Jerusalem (Matthew 21:1-9), when palm branches were placed in His path, before His arrest on Holy Thursday and His Crucifixion on Good Friday. It thus marks the beginning of Holy Week, the final week of Lent, and the week in which Christians celebrate the mystery of their salvation through Christ’s Death and His Resurrection on Easter Sunday.

In some of the Orthodox Church, Palm Sunday is often called the “Entry of the Lord into Jerusalem”, is one of the Twelve Great Feasts of the liturgical year, and is the beginning of Holy Week. The day before is known as Lazarus Saturday, and commemorates the resurrection of Lazarus from the dead. Unlike the West, Palm Sunday is not considered to be a part of Lent, the Eastern Orthodox Great Fast ends on the Friday before. Lazarus Saturday, Palm Sunday and Holy Week are considered to be a separate fasting period. On Lazarus Saturday, believers often prepare palm fronds by knotting them into crosses in preparation for the procession on Sunday. The hangings and vestments in the church are changed to a festive color – gold in the Greek tradition and green in the Slavic tradition.