Excerpt from the Homily On the New Sunday, and on the Apostle Thomas by St. John Chrysostom. [PG vol. 63]

I have come pay off in good time an outstanding debt. I may be poor, but I want to forcibly draw on your gratitude. I promised to show the unbelief of Thomas, and here I am to do just that. I’m more than willing to pay off the first debt so that I’m not crushed by accumulated interest. Cooperate with me, then, so that I can deposit what’s owed and entreat Thomas, that by laying on my lips the holy hand which touched the Lord’s side, he will inspire my tongue to explain what you desire. Taking courage from the prayers of the apostle and martyr Thomas, I shall declare first his doubt and then his confession which is the bedrock and foundation of the Church. 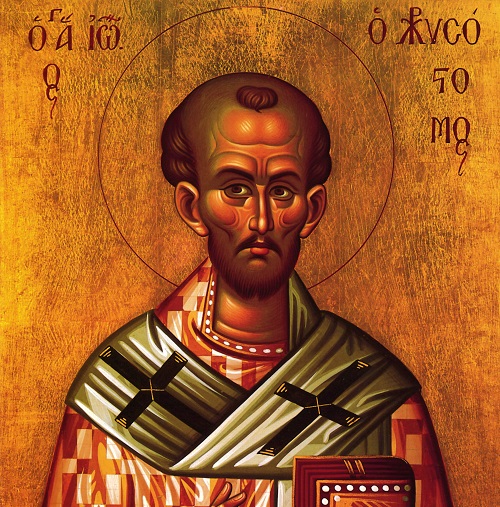 So by not being present, Thomas has guided our steps towards the truth and, by his later arrival, has made us firmer in our faith.

We’ve also received divine breath from his divine mouth, a spiritual exhalation, an exhalation which bestows every grace. We’ve been ordained by the Lord to be masters of the remission of transgressions. We’ve also been given the right  to judge sinners, because he gave us the commandment: If you forgive the sins of any, they are forgiven for them; if you retain them, they are retained.  We have delighted in such words from the Savior, have enjoyed such gifts. How could we not be enriched, being fortunate enough to have such a rich Master. You alone are still poor, because you weren’t present.

And what did Thomas reply?

Persist, Thomas, in this conviction of yours, persist stubbornly, so that, seeing you, my soul can be confirmed in its belief. Persist in seeking him who said Seek and you will find. Don’t just give up if you don’t find the treasure you’re seeking. Persist in knocking at the door of indisputable knowledge until the door is opened by him who said Knock and it will be opened to you.

I love the dichotomy of your thought, because it does away with dichotomy. I love the way you’re so interested in learning because it ends all contention. It’s such a pleasure to hear you often saying:  unless I see in his hands the print of the nails, and put my finger into the print of the nails, and put my hand into his side, I will not believe. Through your disbelief, I’ve been taught to believe. Using your tongue as a tool, you delved into the arable land of the Lord’s body, but I’m the one who reaped the harvest without any effort, and who stores it up for myself. [You said] ‘Unless I see with my own eyes the furrows plowed in his holy hands by the impious, there’s no chance that I’ll agree with your words. Unless I put my finger into the indentations caused by the nails, I won’t accept this good news of yours. Unless I put my hand on his side which is unwitting testimony to the resurrection, I won’t find your view believable. Everything that’s said which is supported by all the facts is powerful and certain. But any view that isn’t proved by actions is fleeting, lost on the air as it leaves the lips. I’m going to be teaching people about the miracles of the Lord. How can I speak about things which my eyes haven’t seen? How can I persuade the unbelievers to believe when I myself haven’t witnessed these things? I can tell the Jews and the Greeks: “I did, indeed, see my Lord crucified, but I haven’t seen him risen. I’ve heard he rose, though”. Who wouldn’t laugh  at what I was saying? Who wouldn’t scorn my preaching? It’s one thing to hear, but another to see. And it’s one thing to make pronouncements and another to see and experience things’.

Because Thomas was troubled by these doubts, the Lord came back to his disciples after eight days, when they were all gathered together as before…

[He said] ‘I heard what you said to your brothers, Thomas. Although I was absent as a man, I was present as God. I was with you in my divinity, and apart from you in my human nature. Do you want me to remind you of the words you spoke: Unless I see in his hands the print of the nails, and put my finger into the print of the nails, and put my hand into his side, I will not believe. Did these words not proceed from your mouth? Don’t these words reflect your thoughts? This is why I’ve come again: since you have doubts. This is why I’ve approached again: since you wanted me to. Now I’m here because of you. For the sake of the lost sheep, I came down from the heavens, though I never left them, either.

So don’t hesitate to learn what you want. Don’t be shy; look at anything you’re searching for. Don’t hesitate to put your finger into my hands. I suffered the nails, so I can put up with the finger of an inquisitive person. I suffered the malice of enemies, so I can bear the curiosity of a friend. My enemies crucified me and I didn’t despair; will I not be able to suffer your examination? Put your finger in here and see the hands that were wounded for you, so that the bruises of your souls my be treated. See my hands and consider whether I am he who was voluntarily crucified for you, or someone else… See my hands and don’t think that the truth of my resurrection is a figment of the imagination’…

When Thomas touched the Lord’s hands and his holy side, he was overcome with awe and great joy at the sight of what he’d desired. He immediately broke out into a hymn of praise to the Lord: My Lord and my God. You’re Lord and God; you’re human and the lover of humankind. You’re a foreign and strange doctor: you  don’t slice through the passions with a knife; you don’t burn wounds with fire; you don’t gather the healing power from herbs; you don’t bind visible bandages on our festering sores. You have invisible bandages of love, which hold together the open wounds. Your speech is sharper than a knife, your word more powerful than fire. Your glance is more soothing than a salve. As creator you effortlessly sanctify your creation; as maker, you easily remake what you’ve made… Because of what I’ve seen, I’ve learned not to overthink; because of what I’ve touched, I’ve learned to venerate rather than weigh in the balance. I know only one Lord and God, Christ our Master, to whom be glory and dominion unto the ages of ages. Amen.