The Sunday of the Holy Fathers of Nicaea 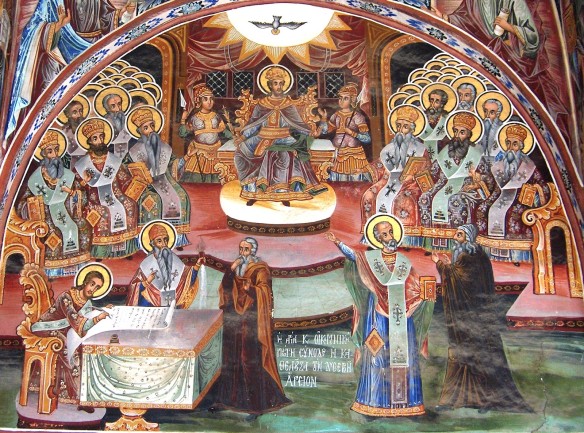 The Sunday which follows the Ascension, the sixth Sunday after Easter, is called the Sunday of the Holy Fathers. We commemorate then the bishops who met at the Synod of Nicaea, the earliest of the seven ecumenical Synods in terms of date.

Regardless of each synod viewed separately, the synods as a whole and the very concept of a synod are of great importance for the Orthodox Church. The Synod of Nicaea, however, occupies a special position in the history of Christian doctrine, since it affirmed the divinity of Christ and thus laid the foundation for all subsequent definitions. Since the sixteenth century, the great temptation for ‘modern’ theology has been, if not exactly a return to Arianism then at least a drift towards a ‘humanist’ view of the person of Jesus Christ, Who is seen more or less as a deified creature. In proclaiming that our Lord is truly God, equal to the Father, the Nicene Creed guarantees the integrity of the message of love and of the divine gift: that God so loved the world that He gave Himself to us and became a person as the unique Son. Were we to change even a single iota of the Nicene Creed, this would diminish the magnificence and generosity of God’s gift. It would alter the very essence of Orthodox Christianity in a radical way.

The commemoration of the Fathers of Nicaea on this Sunday doesn’t mean that the Church proclaims or honours the personal sanctity of each of the bishops who took part. Rather, the Church pays homage to the collective witness that the Synod of Nicaea bore to the Christian truth. In the liturgy, the epistle (Acts 20, 16-18, 28-36) refers to the duties of pastoral care, especially that of combating deviations from doctrine: ‘Keep watch over yourselves and over all the flock, of which the Holy Spirit has made you overseers, to shepherd the Church of God, which he purchased with his own blood. I know that, after I have gone, savage wolves will come in among you, not sparing the flock. Some even from your own group will come, distorting the truth, in order to entice the disciples to follow them. Therefore be alert…’ This is how Paul spoke to the elders of Ephesus. The Liturgy Gospel (Jn. 17, 1-13), taken from the words spoken by our Lord after the Last Supper, expresses the same pastoral and doctrinal concern: ‘And this is eternal life, that they may know you the only true God and Jesus Christ whom you sent… for the words that you gave me I have given to them and they have received them and know in truth that I came from you. I am asking on their behalf…’

This Sunday belongs more to the realm of ideas connected with Pentecost rather the Ascension, since the universal Church believes that the Synod of Nicaea, like the other ecumenical Synods, and, indeed, the apostles themselves when they gathered at Jerusalem, taught at the inspiration of the Holy Spirit. The first verse of the epistle in fact directs our thoughts towards Pentecost: ‘he [Paul] was eager to be in Jerusalem, if possible, on the day of Pentecost’. To be with the apostles in Jerusalem, in spirit, at next Sunday’s great feast- isn’t this what we also desire and humbly ask for?