Samuel the Judge and Prophet (+ Αugust 20)

The Prophet Samuel, the last Judge of Israel, appeared on the stage of Biblical history towards the end of the period of the Judges, which, because of the lack of a king (“there was no King in Israel”, Judges 21, 25) was a chaotic period of intense political instability and of the introduction of foreign elements of worship into the Israelite religion. Samuel came from the small town of Ramah, and was dedicated, by his mother, Anna, who gave birth to him after a long period of infertility, to the sanctuary at Shiloh, the most sacred in the land of Israel. It was here that the Ark of the Covenant was kept, under the care of the priests of Eli, and the boy was brought up in the Mosaic tradition. 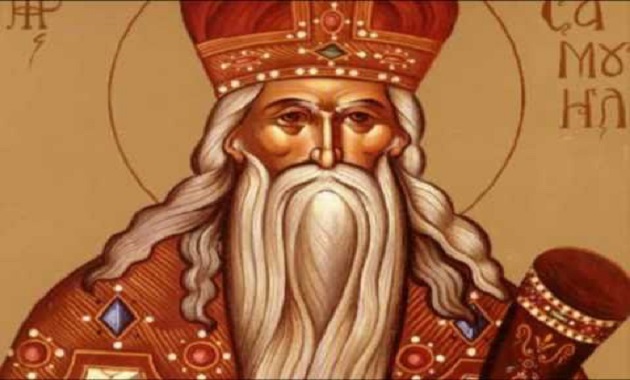 One evening, while he was sleeping in the sanctuary at Shiloh, he heard the voice of God calling him to take up the office of prophet. This scene could be interpreted as a theophany with the purpose of calling him to be a prophet and the delivery of a message from God during the course of a dream at night, a common phenomenon in the ancient East. In the narrative in chapter 3 of KingsIII [Kings I in Western Bibles], mention is made of a divine revelation at a time when Samuel was awake.

Although the book of Judges deals mainly with the personality of Samuel and of his predecessor, Eli, I Kings (I Samuel) is more concerned with the establishment of the institution of kingship in ancient Israel. This was accepted by God, the absolute king of Israel, and implemented by Samuel on the orders of God. Samuel anointed Saul, the son of Kish (I Kings 10, 1-9) and, while the latter was still alive, anointed David, the son of Jesse, to be his successor and second king. (I Kings 16, 1-13), because Saul had fallen into disfavour with God (I Kings 15, 1-9).

When the institution of kingship had been established and the leadership role separated from that of the prophet, (as long as there was no king, Samuel exercised the roles of both prophet and leader), Samuel retreated from public life, bidding farewell to the people and ordering them to observe God’s commandments. He did not, of course, cut himself off entirely from them (Kings 12, 1-25), but criticized the actions of the king, reminding him that the real king of Israel was God and that he, Samuel, was the instrument God had used to anoint him. The prophets of the Old Testament considered themselves a counterweight to the policy of the king, regardless of the fact that many of them had direct dealings with the royal house.

Apart from being the leader of the Israelite people, and until the appearance of the institution of kingship, Samuel was also a prophet of God the Most High. Indeed, his appearance at a time when necromancy, a typical feature of false prophesy, was practised (I Kings 24, 4-25), and when there was an absence of organized prophecy, according to which right could be distinguished from wrong (“there was no distinct vision”, I Kings, 3, 1), leads to the recognition of the direct intervention of God in the emergence of a chosen prophet who would transmit His word and interpret His commandments.

According to I Kings (3, 1), this organized prophesy was known as “vision”, that is a revelation of the word of God through vision. Although the prophet was awake, not dreaming, he did not see images or scenes, but the word of God itself. The vision was a means of transmitting the prophetic word and was inaugurated by Samuel, the Judge and Prophet, who is characterized as the “seer” (Kings 9, 9). This term indicates that the capacity which Samuel enjoyed of being able to “see” and to give answers which came from God, marked him out, as Theodoritos of Kyros comments, as a “seer”, not an ordinary “visionary” who foretold the future, but someone who saw with the eyes of the spirit.

Apart from being a “seer”, Samuel is also referred to as a “mouthpiece”, a term which suggests that he spoke in the name of God and as one whose mission was to transmit the word of God. He was also known to be “a man of God” (I Kings 9,10), indicating the special relationship Samuel had with his Creator. So the prophetic terms of “visionary”, “seer”,  “mouthpiece”  and “man of God” all came together in his person, thus indicating God’s intervention to promote Samuel as His prophet and to retain him in His service.

The period of prophecy inaugurated by Samuel is marked by the feature of ecstasy. A prophecy which issues from the lips of a prophet when he is in a state of ecstasy is known as “ecstatic prophesy”. The phenomenon of ecstasy  was not unknown in the prophecy of ancient Israel, but was more common among the prophets of the Canaanite peoples, who worshipped Baal.

The prophets of Baal wounded themselves with sharp objects during the course of music and dancing, making meaningless noises and increasing their stimulation. The prophets of ancient Israel, however, went into ecstasy when they were seized by the Spirit of God, (which, according to the approach of the Fathers of the Church, is the same as the Holy Spirit) and they uttered properly constructed prophetic discourse.

Prophecy at the time of Samuel  appears to have been a mass movement, known as the “chorus of prophets” (I Kings, 10, 5). The choruses of prophets were religious groups, the purpose of which was to preserve the Mosaic tradition, the basic features being leadership by an outstanding personality, and ecstasy. The foremost among this group of prophets was Samuel himself and his group/school is considered his legacy to the people of God.

When Samuel had completed the mission for which God had appointed him, that is the establishment of the institution of kingship, the anointing of David as king even while Saul still lived, and the introduction and organization of prophecy, the time came for him to bid farewell to this earthly life. He died and was buried in his courtyard at Ramah (Armathaim), having gathered all the people of Israel around him (I Kings, 25, 1).

As the note to his memory in the Synaxarion mentions, he prophesied for forty years and finished his task 1,035 years before the advent of Christ. He is commemorated on 20 August.