6th Sunday of Luke: ‘The Possessed Man as the Fragmentation of the Human Person’

On the 6th Sunday of Luke, the great Redeemer of the human race, while He was in the land of the Gadarenes, opposite Galilee, relieves, redeems and liberates a man from a terrible threat. The ‘sick’ servant in today’s Gospel is suffering from a spiritual illness. He’s possessed, that is profoundly under the influence of the unclean spirit of the cunning devil. Indeed, according to the reading, he was so enslaved to the demons that he no longer dwelt in a house, but lived among the graves. It would appear that the tormented man, being spiritually dead, found no comfort except among the dead. 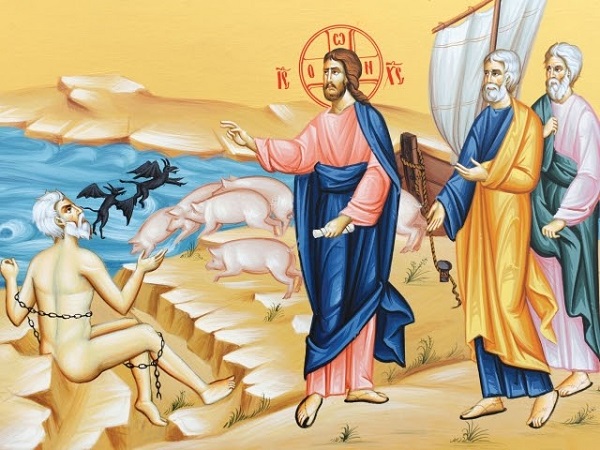 The possessed man is a terrible case which everyone finds appalling. This was not a psychiatric illness but rather a dreadful, hellish experience. But he’s redeemed from this maelstrom as soon as he looks at Christ. The power of the devil diminishes, is extinguished, and becomes powerless in the face of Christ the Liberator. Demons can’t tolerate the presence of their superior, the God of all, and they wither away like weeds.

In the Revelation of Saint John, the last and, perhaps, the most beautiful book of the New Testament, we’re able to recognize more clearly the utter powerlessness of the devil before Christ the Incarnate God. In chapter twelve of the Revelation, a wonderful image and event is described. A pregnant woman, about to give birth, is under attack from a dragon. The dragon stalks the woman, intending, as the text tells us, to ‘devour’ the child as soon as it’s born. In the end, a male child is born and is seized by God and brought straight to the throne, so that it can be kept from harm, since it was destined to become the saviour of the world. As soon as the woman had given birth, she went to a safe place in the desert, where she was looked after by God. Unable to bear its defeat, the dragon turned its attention for a second time to the woman. But again it was defeated. Its attacks against the woman were carried out ‘in vain’, since, whatever it did, she was invulnerable. God had her under His protection and, as it says, covered her with ‘two wings’.

It’s easy to see that the woman in the Revelation narrative is Our Lady, the male child Jesus Christ, and the dragon the devil. If the devil trembles and takes fright in the presence of someone other than Christ, that person is Our Lady. According to Saint Gregory Palamas, she’s the leading opponent of the devil, because throughout her life she was untroubled by all the temptations he subjected her to. So, if we imitate Mary, the Mother of God, we have nothing to fear from any devil. According to this narrative, the devil is unable to affect Our Lady. Because of the child she was carrying in her womb.

According to the Fathers of the Church, as Saint Symeon the New Theologian writes, we can, indeed, imitate the conception and gestation of Christ ‘spiritually’, though not, of course, literally. Such a conception and gestation protects us forever from anything at all demonic and tempting. In particular, Saint Symeon says that every time we partake of the body and blood of the Lord- after proper preparation- we conceive Christ within us, as did the Mother of God. Given that we have this Patristic confirmation, let us fight ‘the good fight’ of faith, taking part ‘perceptibly’ and consciously in the sacraments of the Church, which are the guardrooms of our life. Spiritual people who partake ‘worthily’ of Christ have no reason to fear the devil, nor the wicked traps he sets for us every day. On the contrary, they live a circumspect life, united to Him Who breaks asunder the wicked devil and sends him off to a herd of ineffectual swine, as in today’s reading.