Saint John came from Thives of Egypt and was raised by a rich family. After he took his monastic order from his grandfather ,he said goodbye to the Elder and went to the Holy Land of Jerusalem. He wasn’t blessed with the Orthodox Church ,because he rejected the holy fourth Ecumenical Council of Chalkidona. After his desire to worship the Holy Land, he sees in a vision that he worked too hard and struggled to go inside to worship the Holy Cross,but he couldn’t find the entrance.Although he wasn’t sad,he heard a voice that told him that:those who aren’t united to the Orthodox catholic Church ,aren’t worthy to worship the Cross and after he woke up ,he appeared and united to the Orthodoc Church .

After his return to his grandfather he said goodbye to him again ,went out the monastery and since he found a small cave to a steep and rugged place called Hozeva,he staued in it and fed with the roots of the trees ,that were there.And for his excessive exercise and the height of virtue ,he made a lot of miracles and became an abbot of many monks,who taught them to imitate his virtuous life,in this place of the desert he rested in peace. 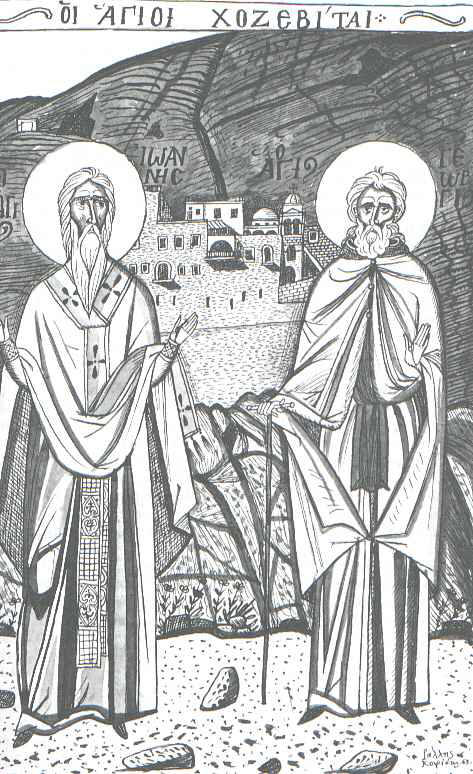 God wanted to glorify this saint, so He revealed him with this way. To those places there was a big and notorious eremite, called Ananias. To this big man they brought a rich man’s son who was bothered by the evil spirit. The saint didn’t accept him, but because of his enornous degradation, he encouraged them to proceed deeper through the desert and ask for Egyptian John. So when the delegates found the person that were looking for and revealed the cause of their arrival, he wasn’t convinced to pray in the beggining. Nevertheless they continued to bother him and press him, so he decided to pray and when he turned, he says to the daemon: “in the name of Jesus Christ, evil spirit, not me but the slave of God Ananias, orders you to get out of the child”. When the evil spirit heard those words from the Saint, he came out and the child recovered.

Wherefore this paradox miracle made the saint notorious,he was convinced despite his will,to be ordained bishop of Cesaria.Once he saw that he couldn’t live the calmingand peaceful life,he abamdoned Cesaria and returned to the desert again.

But even there this trrasire couldn’t be unknown,because a farmer which had a little child ,that was also bothered by the evil spirit,he put his child in a basket and after he covered him with grass,he placed it near the Saints door and left.Whem the child cried ,the Saint heard him and went towards he door.There,he recognised the evil spirit in the child and when he send it away the child was finally healed.

The daemon after that didn’t calm down and he got a human appearance so since he found the saint to a steep and rugged place ,he pretended that he wanted his blessing by getting down on his knees.The saint then was surprised by that appearance ,so his legs were tangled up and he fell with his head down to the bottom of the kliff,but even then the homicidal daemon didn’t earn something from this,because the Saint with God’s grace remained harmless.

Then again he gave the slave of God to a killer thief,who sometimes beated the saint ,sometimes he grabbed his cloth and burned his cabin the tyrant.During all of this suffering the only word that came out of Saint’s lips was “Oh Lord ,if all of these are likeable to You,thank you”.The Lord heard him from the sky and after the thief’s arrest by the master ,he died with a bad way and thus the slave of God found great comfort.

But even then the malice didn’t stop to dig ponds against the Saint. Because once the Saint passed through a placecin order to meet some monks, a woman met him at a crossing and after she pritheed, she begged him to accept her invitation to come over to the room that she was staying, in order to receive his blessing. So the Saint was convinced and went in, the illegal and dirty prostitute ,closed the doors and got naked and made all of these actions that are so hard and embarassing to even describe in words trying to infect the uninfected. But this adamantine Saint after winning and refuting the tool of daemon ,he came out uncharmed.

This blessed John ,when he heard for an heremite named Marciano,who was really famous,he had a desire to meet him.But eventhough he had previously put a condition to himself not to come out from his cave even if it was really necessary,he didn’t suffer at all to cancel this condition ,witb which had been commited to himself.But what paradox miracle economized even here God’s care,that can see everything?Lord’s Angel raised up Marciano from his cell and after he elevated him to the sky,he brought him without noise to the cave of blessed John.Since they met and embraced one another and fullfilled by their spiritual conversation ,blessed John added the last speech of Thanksgiving ,by saying:”Thanks to sacred God,who claimed me to see my beloved Marciano” and suddenly after the angel grabbed Marciano,he disappeared from blessed John ‘s sight.This miracle put many thoughts through saint John’s head and made him reluctant.Wherefore he had a war of thoughts ,so he disobey his condition and after he came out of the cave ,he went to the cell of Marciano and all of that because of the importance of the miracle and also because he thought that maybe all of this wasn’t true but fantasy.When he arrived and heard saint Marciano calling him by his name after saint John learned the way of his arrival ,his heart was full of joy and felt exultation .And when they embraced again to each other they thanked and blessed God ,he returned to his cell again.

When saint John heard that Archesilao’s wife, Lord of Cesarea, had been shot by an arrow and her eye was out of her socket, so he went there right away to take care of her and to help her heal. When he saw that the eye went off ,he ordered one of the doctors that were watching to put it to it’s position the way he could and to tire it up with bandages. So, she was healed with the saint’s prayers.

And why do I have to say more? This Saint expelled many daemons from people, healed incurable diceases, made water spew out from various places, put down many times rain from the sky by his prayer and other plenty of miracles made God through Saint John. And after all that at the end of his life in old good age he delivered in peace his honest soul to the hands of God.