Sermon on the Entrance of the Theotokos into the Temple

On the 21st of November, the Church celebrates a special Feast of the Blessed Virgin Mary, her going to the Temple of Jerusalem. As we know from Holy Tradition, her parents Sts. Joachim and Anna were elderly and beyond child bearing years. After many prayers, God blessed them with a daughter, after which they dedicated her to God. They named her Mary, and when she was three years old they brought her to the Temple of Jerusalem, the original having been built by King Solomon. The young Mary was received into the temple community by the Priest Zacharias (the father of St. John the Baptist, and a relative). It is in this sacred atmosphere of the Temple that the pure daughter Mary grew up, listening to hymns, Old Testament readings, and was in constant communion with God through prayer. These years in the Temple were her spiritual preparation for what was to come later: Fulfilling God’s plan to bring into the world our Savior Jesus Christ. 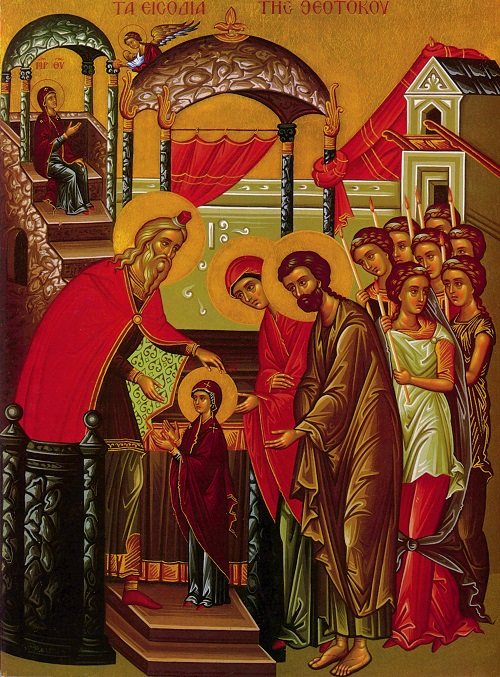 When Sts. Joachim and Anna brought their daughter to the temple, little did they know that she would grow up to claim the highest honor that could ever be given, becoming the Mother of the Son of God! As Christians, we are grateful for the sacrifice they made, in giving up the happiness of having their lovely daughter at home. They did not think to keep her near them in any way, as would be expected of elderly parents to have their children to care for them. They joyfully and willfully dedicated their daughter to God, with absolute confidence that He, in His Fatherly love, would provide for them all. They are a good example for Christian parents. Parents should bond their children with God and His Church from the very beginning. To guide the little ones to the Church in loving it, to the Divine Liturgy and participation in the Sacred Mysteries. In this way, they will be ensured a blessed life. This constant communication with God will help the children grow, developing their skills and talents to advance in life. With the power and blessing of God, they will be delivered from the temptations and traps of the Evil One and his followers. Another shining example that the holy parents of the Theotokos provide, is what to do when a child has a calling to dedicate themselves fully to God as a monastic or priest. Parents can learn from their example, because it often happens that Orthodox parents resist when their child expresses the desire to become a monk or nun. They are afraid to “lose” their child. This can be the first reaction of a mother. Yet St. Anna had no such thoughts about little Mary, even though she was alone and had only received her child after many years of prayer. Both she and her husband did not hesitate to take their daughter by the hand and send her to the Temple. When it comes to children who choose this path, who knows what level of holiness will be reached, or how many people will be helped by their example or word to find the salvation of their souls!

“I honor those who honor Me” (1 Kings 2:30) said the Lord. The Most Holy Mother of God was praised by Him, she who glorified God by her obedience and wholehearted dedication to Christ! She was honored, and honored not only as the most glorious human being who ever lived, but higher than the Holy Angels: “More Honorable than the Cherubim and beyond compare, more glorious than the Seraphim!” God honors and glorifies others as well, depending on their degree of devotion to God and His Church.

With the glorious hymns of this Feast, Our Church puts forward the deeper theological meaning of the Virgin Mary’s Entry into the Temple: “Today, the most pure temple of the Savior, the precious bridal chamber and Virgin, the sacred treasure of God, enters the house of the Lord, bringing the grace of the Divine Spirit. The Angels of God praise her. She is the heavenly tabernacle.” (Kontakion of the Feast).

She is the vessel of the Son of God, bringing Christ the Savior into our world. This is why our Church commemorates this event early in the Nativity Fast leading up to Christmas Day. It is in anticipation of this supreme event, the coming of the Redeemer and Savior to the world, Jesus Christ.