The Grandeur of the Mother of God [3]

If we see that some saints enjoy greater glory than others, this is due to the fact they have even a little bit more of Christ’s humility within them, nothing else. There are saints who have astonishing ascetic achievements to their name, but have less glory than others who performed fewer ascetic feats and this is due to the amount of the blessed divine raiment. Forgive me, but the more I write about the blessed raiment of the divinity, which the Mother of God had in its entirety, I’m overcome with fear, because my unworthiness causes my hand to falter and it’s perfectly possible- indeed, this is the most likely circumstance- that it’s my own pride that’s motivated me to dare to write about the humility of Christ. Pray, then, for me that I don’t suffer a terrible catastrophe, wretch that I am. On the other hand, my conscience won’t allow me to stop what I’ve already started, so I probably have to complete it. May the Lord take pity on me and may it all be for my good. And if, God willing, something unexpectedly good occurs and even one soul benefits from my poor written word, that would bring me great joy. 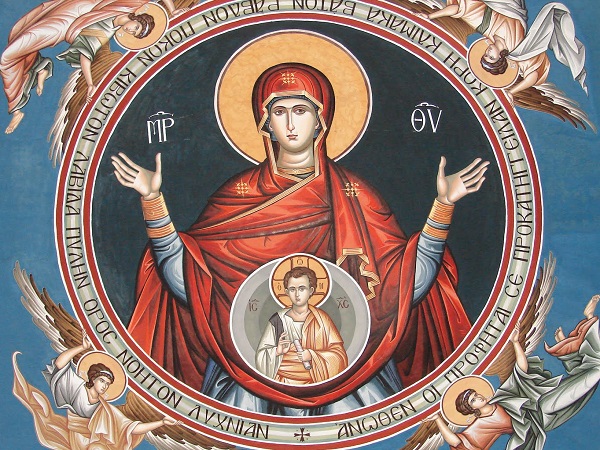 We have to make a distinction to see why it is that this blessed raiment of divinity is not found in other people as it is in the Mother of God. The answer is easy and simple: Christ’s humility is hindered by one thing alone and that is that even the greatest saints have acted against the will of God, either in thought, word or deed. Let’s look at a couple of examples. Who’s greater than Saint John the Evangelist, the beloved Apostle and Virgin. And yet, when the lot fell to him to preach the Gospel of Christ in Asia, he hesitated, with the result that, to make amends, he was shipwrecked for about 40 days and suffered much else besides at the hands of heartless people. Who doesn’t reverence the sanctity of Saint Basil the Great, of whom we might say that he himself is the Church? This great saint said: ‘I’ve never known a woman and I’m not a virgin’. We’ll confine ourselves to these examples, because the history of the Church is teeming with similar cases, which show the great distance which separates our saints from the pinnacle of sanctity, the Mother of God. If it’s true that Our Lord had Saint John the Baptist as His fore-runner, then by the same token, Our Lady had as her fore-runners all the righteous women of the Old Testament, especially Judith, who, through her virtue and wisdom managed to decapitate the wicked idolater Holofernes and thus save Israel from certain extermination. So Judith gave the people of God the prospect of life and happiness, at a time of great danger, with her decapitation of the bloodthirsty Holofernes, because his army panicked and was then routed by the army of the people of God. So, when Our Lady gave her consent to the Archangel Gabriel, the magnificent events we all know about took place and the fact of Christ’s birth decapitated the lord of this world, that is the devil. And just as the whole of the people of Israel was revived by the righteous Judith’s decapitation of Holofernes, so, by the birth of Christ from the womb of the Mother of God, the devil was decapitated and not only Israel but all the nations were revivified.

It’s difficult to convey the great love and affection which the Athonite monks have for the Mother of God. There’s no question of an Immaculate Conception, because that would make Our Lady more- or less!- than human. Rather she’s seen as the perfect human person, the person God envisaged us as being. This is an answer to those who say that God ‘made a mistake’ with Adam and Eve in Paradise, that things didn’t turn out in the way He had expected. This may have been how it looked at the time of the Old Testament, but with the birth of a person, Our Lady, who fully submitted to the will of God, the destiny which God had always planned for us- our entry into eternal paradise, the kingdom of God- became possible.

This is illustrated by the famous interchange between Emperor Theofilos and the young girl, Kassiani, later to become an abbess, poetess and hymn-writer:

And in his book ‘Miracles’ C. S. Lewis has this to say: [Christianity ] does not tell of a human search for God at all, but of something done by God for, to, and about Man. And the way in which it is done is selective, undemocratic, to the highest degree. After the knowledge of God had been universally lost or obscured, one man from the whole earth (Abraham) is picked out. He is separated (miserably enough, we may suppose) from his natural surroundings, sent into a strange country, and made the ancestor of a nation who are to carry the knowledge of the true God. Within this nation there is further selection: some die in the desert, some remain behind in Babylon. There is further selection still. The process grows narrower and narrower, sharpens at last into one small bright point like the head of a spear. It is a Jewish girl at her prayers. All humanity (so far as concerns its redemption) has narrowed to that.” (From Miracles, Chapter 14).

I was at Katounakia on the Holy Mountain this summer and met the venerable Elder Daniil. He told me: ‘Look, it takes 10 minutes to say the Salutations to the Mother of God before you go to sleep. Can you not sacrifice ten minutes of your sleeping time for Our Lady? We’ve only got one Mother’ [WJL].