Sermon on the Sunday before the Exaltation of the Cross (John 3: 13-17)

Today, on this Sunday before the feast of the Exaltation of the Holy Cross, the Lord presents the central theme of the Gospel in a few words: God saves the world from the devil and sin driven by endless love alone!

To help in understanding, Jesus uses as an example a miracle which occurred while the Israelites were in the desert (Numbers 21:9). The people had been freed from slavery to the Egyptians by God’s miraculous interventions. Yet, the Israelites often forgot the true God, who poured down upon them heavenly food every day, and worshiped the idols. God, to again bring them close to Him, allowed poisonous snakes to bite them, causing many to die. Moses turned to God with tears, and begged for the salvation of his people from this calamity. God replied: Make a snake statue made of copper, and put it on a high pole- so a cross would be formed- and those who were bitten by the snakes can look at it and be saved. So it happened. This is exactly what happened in the salvation of the whole world and the human race: Jesus accepted being nailed on the Cross, so that those who are poisoned by the devil (the ancient serpent) can turn to Him in faith and be saved. 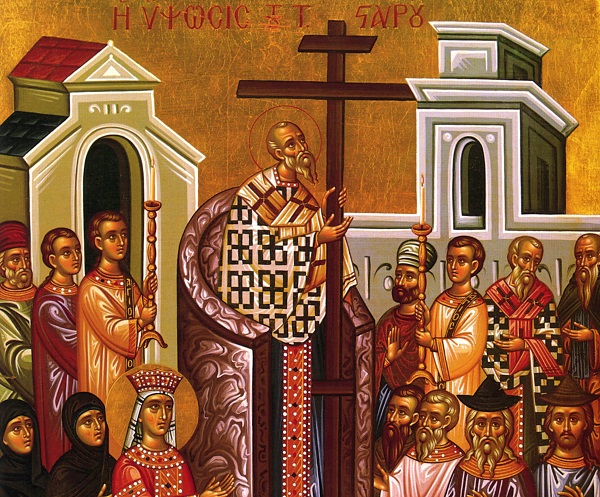 Indeed, we should realize the extent of the sacrifice of the Son of God, Jesus Christ for us! Why should He be sacrificed? Did we deserve it? The Holy Gospels are full of the hostile actions of the people and Jews against Jesus. Often “Jews took up stones to throw at Him” (John 8:59). They slandered Him as a friend of the sinners and unjust customs. They accused Him of not keeping the commandments of God! They came to the point of claiming that Jesus did miracles with the power of the devil and often sought to have him killed. And Jesus, in spite of all this, is going to be crucified for these people and for all of us! The Apostle Paul, amazed at this greatness of God the Father, exclaims: “While we were still sinners, Christ died for us (Romans 5:8). While the people were still enemies of Christ, Christ died for us! Something like this had never happened! History has written of times when someone would offer to give his life to save his friend, but we had never heard of a man who died to save his enemy. Only Christ was sacrificed for all, friends and foes.

Why does God the Father decide to sacrifice His only-begotten Son, and Christ accepts suffering this sacrifice? The Lord Himself gave us the original answer in today’s Gospel: ‘God so loved the world that He gave His only begotten Son, that whoever believes in Him should not perish, but have everlasting life” (verse 16).

But we must remember something important that the Lord points out. The Son of God died for the salvation of all, but not everyone is saved! As in the Sinai desert, those who faithfully looked upon the copper serpent on the wood were saved, so also those who with faith look towards Jesus Christ hanging on the Cross are saved. The Lord emphasized: “…whoever believes in the Son of God….have everlasting life.”

My brothers and sisters, what happiness there is, if we could feel deep within us this infinite love Christ has for us! If we constantly and faithfully turn our soul’s gaze to Christ. If our life was such that we could say along with the Apostle Paul, “the life which I now live in the flesh I live by faith in the Son of God, Who loved me and gave Himself for me” (Galatians 2:20).