The Dormition of the Mother of God: a liturgical approach

The feast of the Dormition of the Mother of God is celebrated on August 15 by the Christian world and is the greatest of those established by the Church in honour of the Mother of the Lord. It may be the oldest of all. The first evidence we have for it dates from the 5th century, round about the time when the 3rd Ecumenical Synod was called in Ephesus (451), at which the dogma of the Mother of God was defined and the honour due to her was developed. It appears that it was first held in Jerusalem on 13 August and was transposed soon afterwards to the 15th of the same month. It was a general feast of the Virgin, without particular reference to her Dormition.

It was called “the day of Mary, the Mother of God”. The centre for the celebrations initially was a kathisma (seat), a church in her name, which was located outside Jerusalem, some three miles along the road leading to Bethlehem. The association of the feast with the Dormition of the Mother of God occurred at the famous church of Our Lady in Gethsemane, “Mavrikios’ house of prayer”, where her grave was. This church quickly acquired the status of the most important pilgrimage site of the Mother of God, and its renown became the reason why the feast on 15 August quickly spread throughout the Christian world, East and West, as the feast of the Dormition. 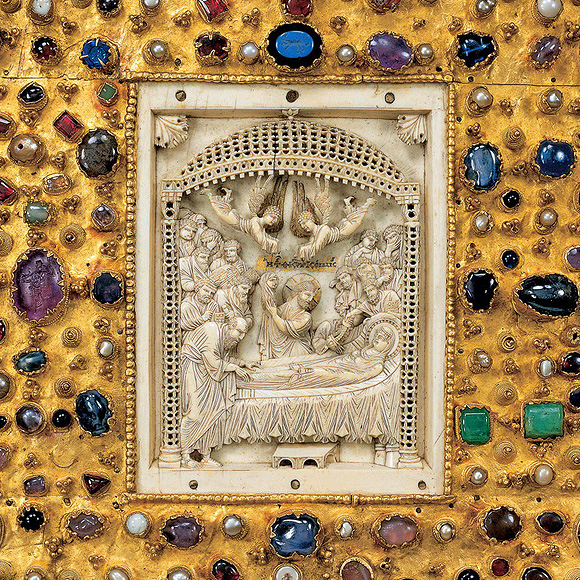 The feast was later elevated, with a preparatory fast and the extension of the feasting until 23 August or even to the end of the month and so it became not only the greatest of the feasts of the Mother of God but also one of the most important in the Church’s year. It was only natural that this should be so, because Our Lady is the best-loved and holy person after Christ, which is why she has attracted the honour and veneration of all generations of Christians. Countless churches and monasteries have been built in honour of her Dormition; in every church, behind the main entrance, wonderful wall-paintings of astonishing composition depict her funeral; her service his been embellished with choice hymns; and fine words and encomia have been expressed by the Fathers and modern Church figures on the day when we commemorate her. All generations of humankind have rivalled each other in presenting the best they have to offer,  to praise and bless the Virgin Mary in word and deed.

If we are to understand the festal content of the feast of the Dormition, and indeed, that of the other feasts of the Mother of God, the Conception, the Nativity, and the Entry, we need to look back briefly at the sources from which the information concerning her was drawn. Otherwise, it’s impossible to interpret all the things associated with this celebration: the narratives, the hymnography and the iconography. The authentic historical sources, the Gospels and the other books of the New Testament have not preserved any information about her life before the Annunciation or after the Ascension of the Lord. The intention of the authors was to narrate the life and the work of salvation of Christ, and whatever was directly linked with Him; not to satisfy the devout curiosity or the historical interests of their readers. By word of mouth, however, the tradition of the Church preserved various pieces of information having to do with the life of the Mother of God before the Conception of the Lord and after His Resurrection. Thereafter different authors, devout for the most part, took this information and embellished it throough their imagination, and, to give their works greater kudos, affixed great apostolic names to them. The Church rejected these works and called them apocryphal and falsified. In later times, many of these narratives, in their most basic forms, provided the subject matter for the formation of feasts, the construction of narratives, the poetry of hymns and the composition of icons. In any case, as we’ve said, the core of these narratives had as its base very old historical traditions concerning the person of the Mother of God.

STORY OF THE EVENT OF THE DORMITION

The event of the Dormition, in particular, is told, apart from elsewhere, in an apocryphal narrative which bears the name John, the disciple beloved of Christ. We shall present a summary of this lengthy text here. At each point, the reader will recall corresponding phrases from the hymns and synaxarion of the feast and details from the icon of the Dormition, which was composed by Byzantine artists.

After Christ’s Ascension, the Mother of God went to the life-receiving tomb every day and  prayed. One Friday, the Archangel Gabriel appeared to her and saluted her: “Hail, you who bore Christ our God. The Lord has heard your prayer and you will leave the world and enter the true and eternal life”. The Mother of God returned home, burned incense and prayed to Christ to send her John and the other apostles, so that they could be present at her death. Her petition was heard and the first to arrive, snatched up in a cloud was John and then the others were borne by clouds and came from the ends of the earth, to which they had scattered. The Lord arrived in his radiant glory and, with thousands of angels, He received the soul of His Mother. She blessed the apostles and the world, interceded for the salvation of all and, having been given the assurance that any soul invoking her name would not be put to shame but would find mercy and comfort and defence and boldness in the present life and that of the future, she gave up her holy soul into the hands of her Son.

The apostles surrounded the body and, chanting, lifted up her bed with the body lying upon it, to be buried. A Jew by the name of Jeronias made to attack the bed, but an angel of the Lord, with a sword of fire, cut off his arms at the shoulder, and they remained attached to the bed. He repented and they were re-attached, while the apostles continued the cortege undisturbed. The body was buried in a new tomb in Gethsemane, but on the third day was transported to Paradise.

The poetry of the Church has embellished this simple narrative. The three stikhira (poetic hymns)  in the first tone at Vespers (the first an automelos [contrafactum] and the others based upon it) praise the Mother of God and her Dormition in a wonderful manner. The substructure, however, can easily be recognized as the apocryphal narrative: Gethsemane, the words of Gabriel, the presence of the angelic powers, the transition from the grave to heaven.

The stikhira at Lauds in the 4th tone have the same theme. In the first, the whole cosmos, heavenly and earthly, rejoices, accompanying the mother of Christ and singing a funeral song for her. The other two describe the arrival of the apostles and their chanting at the graveside, as well as the presence of the angelic powers and the reception of her spotless soul by Christ.

Finally, let us take a look at the most exceptional tropario of her feast, and, indeed, of all our troparia. It is the doxastiko at Vespers. It takes its subject matter from the apocryphal narrative. The exceptional nature of the hymn lies in the fact that it is not sung in only one tone, as are all the other Church hymns, but in all eight.

On reaching your immaculate and life-giving body, they embraced it fervently.

The highest powers of heavens attended, with their own master,

Seized with awe, they accompanied your inviolate body which had held God, and went on high before you, calling, unseen, to the ranks above: “Behold the Maid of God, the Queen of all, is at hand”.

Open wide the gates and welcome the mother of the everlasting light.

For through her the salvation of mortals has come; we are not strong enough to look upon her and are unable to render honours worthy of her.

For her excellence is beyond all conception

Therefore, most pure Mother of God, living forever with your Son and life-bearing King, pray without ceasing that your young people may be sheltered and saved from every adverse assault, for we have your protection.

And we bless you in beauty and light unto all ages.