‘Dance, Creation, on Hearing of the Birth of the Young Child’ (Kontakio of the Forefeast of the Nativity)

Together with the hymnographer, we wonder profoundly, are at a loss and astonished at the incomprehensible mystery of Christ’s incarnation, which natural time has brought us to celebrate once again this year.

What is really beyond understanding, of course, is the line ‘dance, world on hearing of the birth of the young child’.

Is this phrase poetic license or does the hymn-writer see and hear something else?

How does the whole of creation dance? Symbolically, metaphorically? Does it, then, experience the presence of our unapproachable God Who has impoverished Himself? How is it that the whole of creation, animate and inanimate, the mountains and dales, the rivers and waterways, the billows of the sea, the ice and rain, the light and the darkness, the sun and the moon, the planets and the stars, the plants and the trees, the tame and the wild animals, the fowl of the air and the underwater sea-creatures and everything else recorded in the catalogue of the psalmist should praise and bless their Creator, dancing unceasingly to His glory? 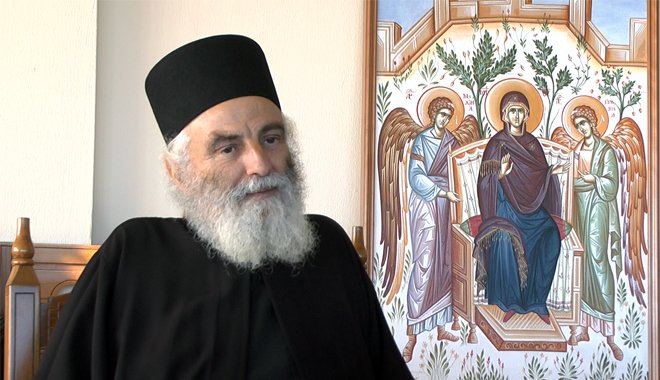 It makes you think of our village festivals where, on the great feasts, after the liturgy, the priest would be the first to lead the dancing and everyone would follow, in an unending circle, singing and enjoying the holiday.

The modern view is that these were merely expressions of popular exuberance. And it may be that, in their simplicity, this is what they were. But, even if they didn’t fully understand it, these rough, unsullied people were dancing for the great mystery of the joy which our incomprehensible God brought to us with His incarnation and manifestation on earth.

Their dance was transformed into an everlasting hymn of praise for the revelation of the sole truth, that God humbled Himself so greatly that He is to be found everywhere, that He enters inanimate matter as well as into the animate life of humankind. When we welcome Him freely, He wishes to save each of us fallen creatures.

And the whole of creation, experiencing this descent, responds to this encounter and, seeing and hearing His coming, dances and praises its Savior, Who, through His humility, has returned it to its first, ancient beauty, when its master-craftsman Creator formed it with His hands and His uncreated breath. And its joy is even greater, indeed boundless, at being freed from the degradation which the sin of humankind brought upon it by our fall, at being able to cast off its concomitant pain and sighing.

The dance also continues and grows in power in the hearts of those who, humbled, reduced and freed of the temptation of equality with God, fall down and worship, with the lowly beasts, the young Child, the pre-eternal God’.

* The word in Greek is οικουμένη, which may mean ‘inhabited earth’, or ‘commonwealth’. Often, though, the Fathers use it as a synonym for ‘creation’, as Fr. Serapion does here.

I met Father Serapion at the Monastery of Simonos Petras on my first visit to Athos in 1975, soon after he and the rest of Elder Aimilianos’ brotherhood had arrived from Meteora. We became better acquainted when he became Steward of the women’s monastery at Ormylia, a dependency of Simonos Petras, and we collaborated on a number of translations. He was a very likeable personality, as well as being profoundly spiritual. He was also endowed with formidable gifts as an administrator. On many an occasion I have heard Greeks say: ‘If only we had Fr. Serapion running the country’. He fell asleep in the Lord on 15 April, 2019, a mere three weeks before the demise of his beloved Elder, Aimilianos, both at Ormylia.

He features in an American documentary entitled A Visit to the Holy Mountain: https://www.youtube.com/watch?v=5D8OxrSZZU8 [WJL].