What should be admired first from what the Evangelist Luke told us today? The people of Galilee, who thirsted to hear the words of Jesus? They filled the shore of Lake Gennesaret as soon as they learned that Jesus was there, and they longed to see Him and hear Him. His word sweetened their hearts and gave peace, strength and enlightenment. They had never heard such words before! Even His enemies, the guards of the Hebrew high priests, after being sent to seize Jesus, confessed: “No man ever spoke like this Man” (John 7:46). And instead of arresting Jesus, they were fascinated and listened to him! Let us admire the simplicity of the Lord, who decided to get into Simon (Peter)’s fishing-boat, so His listeners could see Him better, and speak to them.

Or the obedience of Peter to Jesus, who told him to go out fishing around noon time? An experienced fisherman like Peter knew that fish were not caught in the day time! The other fishermen would maybe mock them or laugh when they see them throw their nets out for fishing at that time. After all, last night he could not catch any fish, so he expects a catch now? But Peter willingly obeyed Christ! Let us still admire the multitude of fish caught in such a short time, and at that time of day, so that not only was Peter’s boat filled, but the other Zebedee boat as well, to the point where they were in danger of sinking. 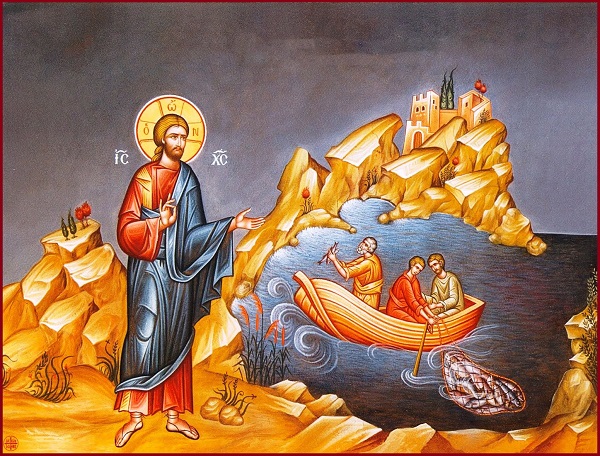 Peter’s reaction was remarkable when he saw so many fish, as it was something he had never seen before. Instead of expressing his thanks to the Lord for such a great blessing, he says to Him: Please get out of my boat. What kind of strange behavior is that? Why does Peter do this? It becomes clear in his words: “Depart from me, for I am a sinful man, O Lord!” (verse 8). He felt his sinfulness, and in humility declared that he was not worthy to have on his simple boat the great honor of the Lord’s presence. As the Evangelist Luke explains: “For he-Peter- and all who were with him were astonished at the catch of fish which they had taken” (verse 9).

All of this is admirable, and among other things, they teach us something very important for our lives. Peter and his associates, when they struggled alone all night, thought they were experienced fishermen, working under the best conditions for fishing and yet had no profit. But when they had Christ with them and obeyed His words, despite all of the unfavorable conditions for fishing, they earned more than they ever had in their lives! Does that say something to us too?

Unfortunately, Christians influenced by the materialist spirit of the time do not respect the spiritual and moral values of the Gospel. They say: You cannot survive in today’s world with the Gospel, You have to compete with others using the same means that they do. What are these means? We know it includes lies, fraud, theft, usury, deception, unfulfilled promises, extortion, and so many others that have brought humanity to such a terrible situation! We see the downfall of so many of them! Because of the profiteering, others become prisoners, with broken families and facing the assault of society. They suffer from psychological problems and what is worse, lose their souls. The Apostle Paul writes about them: “Tribulation and anguish, on every soul of man who does evil” (Romans 2:9). They may at first appear to be gaining and prospering, but they have a bad end. There is a saying: “The liar and the thief rejoice in their first year only.” But those who follow in Christ’s example, respect and obey His will: “glory, honor and peace,” the Apostle Paul writes in his Letter to the Romans (2:10).

My brothers and sisters, let us always have in front of our eyes the image of Jesus with Peter and the two boats full of fish, and remember this: If we have Christ near us and we will work according to His words, we will enjoy blessings that no one else can give us.