The parable of the Great Banquet, which we heard today in the Holy Gospel, was told by Jesus at the house of a Pharisee lord during a dinner in which he had been invited with others. He took the opportunity to teach this parable from the words of one of those who ate with Him: “Blessed is he who shall eat bread in the kingdom of God” (Luke 14:15).

The Lord compares the Kingdom of Heaven to a great feast or banquet in which everyone wants to take part. Here they can enjoy the goods that the affectionate Father God has prepared. So he sends his servant to call the most distinguished and important people. But each refused to attend and made excuses. The first said to him: “I have bought a piece of ground, and I must go see it.” A silly excuse! He didn’t look at the land before he bought it? The second one said: I bought five yoke of oxen, and I am going to test them.” Could this not have been done later? And the third said: “I have married a wife and therefore cannot come.” He was called on a joyous occasion, and he had a chance to bring his wife with him!
All of them have a common feature: They did not appreciate the honor that was offered to them by the host, who had prepared such a great feast. 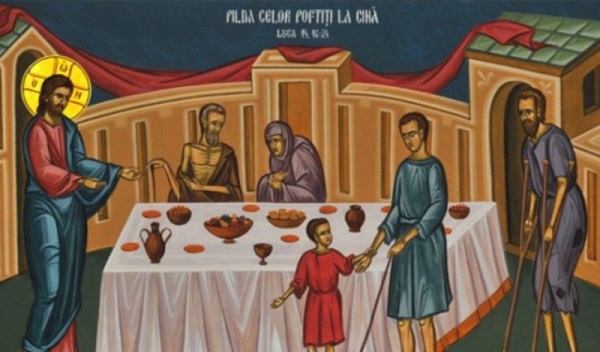 This is just what happened to the Lord when he called the Israelites. Here was the Son of God, who came as a man to the earth and invited them to believe in Him and to enter into His heavenly Kingdom! They were the first, but they said no. It is the same with different people whom God calls to enjoy the blessings He offers through His holy Church. For various reasons, they refuse.

In addition to His Kingdom in Heaven, the Lord invites Christians to another great Supper that is prepared here on earth. It is the Last Supper, the first time Jesus spoke to His disciples that Great Thursday night, shortly before being arrested and led to Calvary. This Lasting Supper continues to be offered today, as it has over the centuries, so that all Christians for all time can participate in it. We understand: It is the Holy Mystery of the Divine Eucharist, which takes place during the Divine Liturgy every Sunday and feast day.

At this meal, the Lord proclaims Himself as food to all His believers: “take, eat; this is My body.” And “Drink from it, all of you. For this is My blood…for the remission of sins” (Matt. 26:26-28). With this divine nourishment, the soul and body are cleansed from all sins. The Holy Gifts unite Christians with Christ and their participation in the heavenly Kingdom is ensured. This is exactly what is emphasized in the prayer of the Divine Liturgy (reading before the Lord’s Prayer): “Lord,….make us worthy to partake of Your heavenly and awesome Mysteries from this holy and spiritual Table with a clear conscience; for the remission of sins, forgiveness of transgressions, communion of the Holy Spirit, inheritance of the Kingdom of Heaven….”

There is no greater reality in human life than our participation in the Mystery of the Divine Eucharist, and no greater blessing and joy than when we live with Holy Communion. That is why the believer, who understands the benefit they receive with their union with Christ, leaves every other work behind on Sunday, and rushes to go to Church. It is here that they meet the Lord Jesus Christ, who is waiting to unite with them and offer His great blessings.

United with Christ here on earth, we will be worthy to hear in His Second Coming: “Come, you blessed of My Father, inherit the kingdom prepared for you from the foundation of the world” (Matthew 25:34). Amen.