The feast of the Reception of the Lord (Candlemas, the Meeting of the Lord) which we celebrated recently is held exactly forty days after the Nativity. The name in Greek means ‘meeting’, but not in the sense of a mere encounter. It’s more in the way of a welcome, that is, someone going out to receive another person, as Symeon is depicted as doing in icons of the feast. In the 6th century, February 2 was appointed as the day of the celebration by the emperor Justinian, and this date was chosen because it falls exactly 40 days after Christmas, which had been established in the 4th century as December 25. 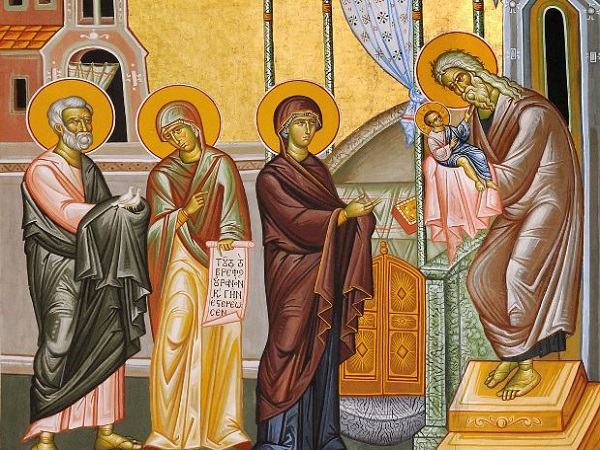 We draw our evidence for the Reception of the Lord from the Gospel according to Saint Luke. In the second chapter of his Gospel, Luke the Evangelist mentions two basic events: a) the circumcision of Jesus on the eighth day after His birth (Luke 2, 21) and b) the arrival of the divine infant at the temple in Jerusalem 40 days after His birth, both procedures being prescribed in Mosaic Law (Luke 2, 22-39).

These events as described by Saint Luke are neither fortuitous nor dependent on a personal initiative, but are the result of observance of an appointed ritual. This is described in the book of Leviticus, the third of the historical books of the Old Testament.

According to Leviticus, every woman who was pregnant and gave birth to a male child was unclean until the eighth day, when the child would be circumcised. She would remain unclean thereafter until the fortieth day after the birth, when she would then be cleansed. It was forbidden for her to touch anything sacred or to enter the temple before the time of her purification was complete. If the woman gave birth to a female child, the number of days for her purification was fixed at 80. (Lev. 12, 1-5) This passage in Leviticus describes, on the one hand, what a woman should observe during the period of her confinement and, on the other, whilst at first sight seeming to be rather harsh towards the woman, also allows for her protection from sickness and for her rest and recuperation from the trials of birth.

Leviticus goes on to describe the rituals that take place at the time of the woman’s purification. It provides that, as soon as the required number of days have been completed, animals which were without blemish were to be offered as sacrifice to the Lord and for the purification of the woman (Lev. 13, 6-8). There was nothing magical about these sacrifices, as some may have imagined. They were aimed at the restoration of the relationship between the woman and God, in the sacred location.

Naturally, this ritual was not independent of the whole of the Law of the Old Testament, but was, in fact, indissolubly linked to the Lord’s command concerning the offering of the first-born, as related in the book of Exodus. This book presents God as commanding Moses that every Israelite should consecrate to Him every first-born male, be it human or animal (Ex. 12, 1-2).

The consecration which God sought was required as proof of gratitude and recognition on the part of the Israelite people towards God, Who had redeemed His people from enslavement to the Egyptians. It also served as a reminder of the favour they enjoyed whereby the first-born children of the Israelites were spared when the angel of death slew the first-born children of the Egyptians. As regards the offering of the first-born of animals, Mosaic Law is clear and makes the distinction between clean and unclean. Since the first-born of asses were unsuitable for sacrifice, they were to be replaced with a commensurate sum of money. This regulation also applied to people, because God would not accept human sacrifice. In chapter 13 of the book of Exodus, which deals with this matter, it states: ‘You shall set apart every [offspring] opening the womb, the males to the Lord, every one that opens the womb out of the herds or among your cattle, as many as you have, you shall sacrifice the males to the Lord. Every [offspring] opening the womb of the ass you shall change for a sheep, and if you will not change it you shall redeem it. Every human first-born of your sons, you shall redeem’.

Thus, the divine infant also was offered to God, as the first-born Son of the Virgin Mary, in the same way as, in the past, Samuel, the Judge and Prophet had been offered, as had Jacob and other personalities in the Old Testament who had opened the barren and sterile wombs of holy women and for this reason were offered to the Lord and called ‘holy in the Lord’.