It’s an unshakeable and irrefutable truth that every day of our earthly life is- apart from anything else- another step that brings us ever closer to our biological death. Despite the fact that this is the most certain event which will occur to each and every one of us, rich and poor, powerful and weak, in everyday practice we nevertheless are forgetful of it. We underestimate it, so it no longer functions for us as a compass showing the bearings to our destination, which is its advent. 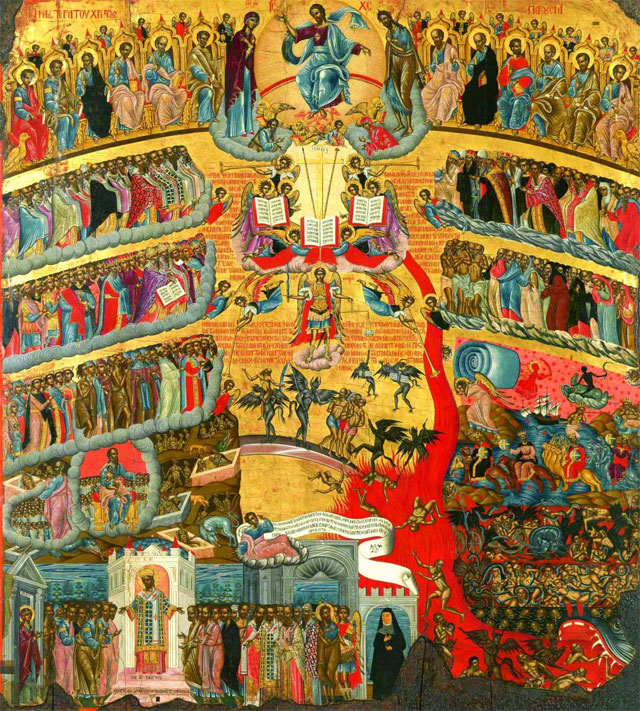 In the Orthodox faith and theology, the truth isn’t a subject for our intellectual ingenuity, but has been revealed to the world as incarnate Self-Truth in the Person of Christ. It’s a matter of life, of us making an effort to effect our inner transformation. Moreover, the whole mystery of the Incarnation of the Word took place ‘for our salvation’, so that, having received divine Grace, we might partake in the Truth, so that we could be altered in accordance with God’s will, and- intent on becoming like the model of our Creator- we might experience freedom in Christ as a release from materialism and as a transcendence of this world. The truth is both objective and universal and any division of it creates subjective ‘truths’ which are incapable of making us Christ-like, as children of God by Grace. In his analysis of the relationship between truth and virtue, Saint Maximos the Confessor tells us: ‘Truth is divine knowledge; virtue is the struggles on behalf of this truth’. In other words, what is required is our union with the truth, not some external, barren conformity with particular moral rules. Nothing, and no virtue, exists by itself, but all things take on form, meaning and content only when they’re linked to the person of Christ, Who is the corner-stone of the Church. This is why the Church doesn’t celebrate intellectuals and moralists, but saints and ‘those taught by God’ who have experienced the one Truth.

Today’s Gospel reading presents the coming judgement of the whole of humankind. Interpretations of it usually emphasize that God’s final criterion will be love. But at this point we have to make a distinction if we’re to avoid a potential relativity in the dogmatic teaching of the Church. Secular, vague and ill-defined ‘love’, which is not linked to the universality of the Truth of the Gospel- the Cross, the Tomb, the three-day Resurrection, the Ascent into heaven, and the Seat at the right hand- isn’t the same as the incarnate love of Christ. Such a love relativizes the nature of the Church, which is actually the only ‘workshop of love’ and ‘communion of deification’. It presents the Church simply as an activist organization which urges its members to do ‘good works’ of a social character and of a purely horizontal dimension. But it must be stressed that such approaches do away with the whole of the mystery of the divine dispensation, in accordance with which the Truth of the Triune God is revealed by the Incarnate Word. Were it possible for us to be glorified through the fragmented ‘truths’ of the world, there’d have been no need for the Son and Word of the Father to become human in order to reveal the truth. Nor would the Holy Spirit have to remind us of what we have heard but are ‘unable to bear’. Naturally, the above is not in any way an attempt to belittle the importance of good works.

It’s of fundamental importance to emphasize that the Church does what no other people or organization can do: it ecclesializes the world, whereas, when the reverse is true, we have to talk about the secularization of the ecclesiastical outlook, where the body of the Church is understood as being on a par with other social organizations and NGOs. This is an elimination of the charismatic nature of the Church, because what characterizes the Church is particularly the vertical dimension, the enlightenment given by the Holy Spirit, which illumines and provides meaning to the horizontal dimension. The phrase used by Saint Paul in today’s Epistle is of particular significance. Speaking of the possible hidden dangers of Christians consuming food sacrificed to idols, he says: ‘so by your knowledge this weak man is destroyed, the brother for whom Christ died. Thus, sinning against your brethren and wounding their conscience when it is weak, you sin against Christ’.

According to Paul, Christ clearly remains the immovable centre and criterion. He makes each Christian responsible towards others, because they’re God’s creations, for whom Christ was sacrificed. Our relationship with others acquires real and eschatological meaning only when it’s grafted onto the prospect of love in Christ. This love, which does not ‘seek its own’, is exclusively the product of a charismatic gift of the Triune God and can’t be compared with the self-serving love we see here and now in the world. There aren’t any substitutes for the Church. Our transfiguration is achieved through the totality of our sacramental life, the culmination being the communion of the most holy Body and Blood of Christ. In this context, everything has its place and purpose and the faithful who’ve been made to resemble Christ see other people no longer with the proud conceit of the Pharisee, but with sympathetic love and a heart which burns. Everything they do is done because they regard others as their brothers and sisters in Christ. Given this, good works acquire a saving, ecclesiastical value, blessed by Christ with the phrase: ‘You did it to me’.