Three Ways of Approaching the Lord (2nd Sunday in Lent)

In today’s Gospel, the paralytic arose immediately, took his bed upon his shoulders and walked past everyone. And everyone was amazed and glorified God saying: “We’ve never seen the like”.

Let’s look at the marvellous powers the Lord reveals for us in this miracle:

He reads people’s hearts, discovering faith in some and malice in others. 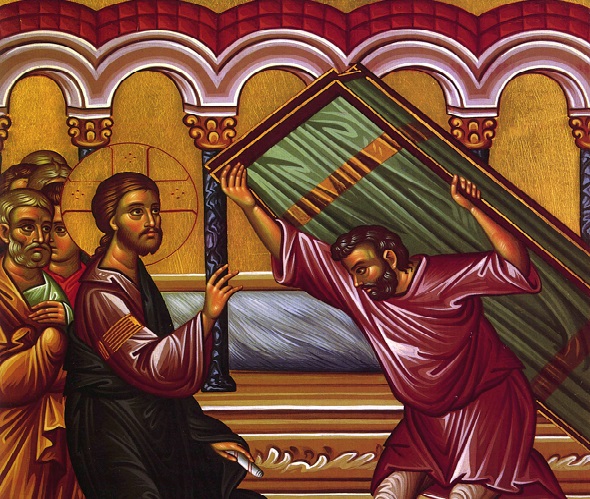 He forgives the soul its sins and makes it healthy, purified of the source of sickness and disability.

He restores health to the sick and paralyzed body by the power of His word.

How wonderful, how dreadful and how breathtaking and life-giving is the presence of the living Lord!

Let’s dwell for a moment on this presence of the living Lord. The most important thing on the path of salvation is that we should approach the presence of the Lord with faith, we should feel it. Sometimes the Lord comes and reveals Himself to us. Thus he went to Martha and Mary in Bethany; he appeared suddenly to Saint Paul on the road to Damascus; to other apostles at the Sea of Galilee and on the road to Emmaus; in the house where he entered, “the doors being shut”; to Mary Magdalene in the garden; and to many saints in dreams or visions. Sometimes the apostles presented other people to the Lord, as when Andrew brought Peter or Philip brought Nathaniel. The successors to the apostles and missionaries brought thousands to Christ and on other occasions one believer would bring someone else. And then there were people who tried hard to approach the Lord through their own efforts, such as the four who opened the roof of the house in order to get their paralyzed friend to Him.

These are the three ways by which people can present themselves before the Lord. What we have to do is to try hard and strive to get ourselves to Him, so that He can help us to approach Him and can illumine us. We have to apply these three ways backwards. This means that, with faith and endeavour, we first have to get ourselves before him. Then we can follow the call and the commandments of the Holy Apostolic Church, the Church of the Fathers and the Teachers. And finally, when we have fulfilled the first two conditions, we have to wait with faith and hope for God to present Himself to us and for His presence to illumine us, strengthen us, heal us and save us.

The measure of the efforts we have to make to open the path that leads us into the presence of God is apparent from the example of these four men. They had no hesitation in climbing up onto the roof of the house in order to lower their sick friend down into the presence of the Lord. They weren’t held back by shame or fear. The example of their great endeavours is like that of the widow who urgently and insistently demanded of the unjust judge that he pass judgement and protect her from her adversary (see Luke 18, 1-5). This means that we must observe the Lord’s command and cry day and night until He hears us. “Knock and it will be opened to you”, He said (Matth. 7, 7). This is the explanation of Christ’s words: “the kingdom of heaven has suffered violence and the violent take it by force” (Matth. 11, 12).

The Lord requires that all the faithful should make every effort, should exhaust their strength, to labour as long as the day lasts, to pray without ceasing, to ask, to knock, to fast and to do immeasurable works of charity. All of that so that the Kingdom of Heaven- the great, dread and life-giving presence of God- should be opened unto us. “But be vigilant at all times, praying that you may have strength … to stand before the Son of Man” (Luke 21, 36). You must have alertness and vigilance in your hearts, so that you don’t become attached to earthly things. Be watchful in your thoughts, so that they don’t lead you way from God.

Be careful with your works, so that you increase your talents; don’t let them wither or disappear altogether. Be ever vigilant so that death doesn’t find you with all your sins upon you, unprepared and unrepentant. This is our Orthodox faith: active, prayerful, watchful. It is taken up with tears and struggles. No other faith demands such efforts from the faithful, so that they may find the strength to stand before the Son of God. Our Lord and Saviour requires this endeavour from the faithful. The Church repeats His commandments from one age to the next, from generation to generation, presenting the example to us of the vast numbers of people who have striven to observe the law of Christ and have been given the strength to acquire glory and inexpressible power, both in heaven and on earth.