On the evening of Great Tuesday, the tropario of Kassiani is sung in Orthodox churches. This is a poetic rendition of an event described in the Gospels and has to do with a sinful woman who showed her repentance by washing the feet of Jesus with expensive ointment and drying them with her hair.

The woman’s action is of particular significance for two main reasons:

1. It prepared Christ for burial, since the Jews were in the habit of anointing the bodies of the dead with a mixture of resin and aromatic herbs.

2. The intensity of the scene indicates the magnitude of her repentance. 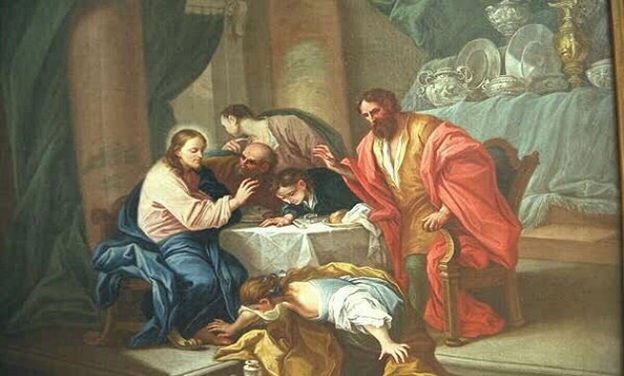 The singularity of her actions has led to speculations unrelated to reality, with the result that a variety of myths regarding the identity of the woman and her relationship with Christ have been invented.

Western Christendom began with her identification as Mary Magdalene, even though there’s no related evidence of this in the Gospels or in later tradition. This identification is due to the confusion of two different persons mentioned in two different Gospel extracts from Saint Luke. In chapter 7, there’s the incident with the sinful woman who washed Christ’s feet with myrrh and tears and wiped them with her hair. In the next chapter, 8, there’s a reference to the women who followed Christ on his journeys around the land of Israel. Mentioned among these is Saint Mary Magdalene who, in the past had been healed by Christ, because she’d been possessed.

Immediately after the raising of Lazarus, his family and friends arranged a meal to thank Christ and the apostles. During the course of this, while Martha was doing her best to tend to the needs of a multitude of guests, Mary did something which would normally be done by the household servants: she washed the feet of the guest. As an expression of her excessive gratitude, she did so with myrrh and, instead of a towel, used her hair.

This incident, which is described by Saint John the Evangelist (12, 1-8) isn’t the same as the one involving the sinful woman and referred to by the hymnographer in Matins for Great Wednesday.

Lazarus’ sister was expressing her gratitude; the sinful woman her repentance.

Saint Kassiani was a very well-educated daughter of the Byzantine aristocracy who later became a nun and devoted herself, among other things, to the composition of hymns. Her most famous piece of work is this tropario, which is known by her name. It describes the incident in the Gospel and includes an important theological investigation into the problem of sin and repentance. Indeed, sin is directly linked, not to moral issues, but to the fact of the Fall and the interruption of communion with God.

It follows that neither Saint Mary Magdalene, nor the sister of Lazarus nor the poetess Saint Kassiani is ‘the woman fallen into many sins’.

The name of the woman isn’t known to us, since the Gospels preserve and honor her action and repentance, but make no mention of her name. For all of us, this anonymous woman is a most powerful example of a change in thinking and life style.

Indeed, it may be that her repentance could be a criterion for our own when we find ourselves before the throne of God at the hour of judgement.

May the rest of Great Week go well for you.