On the Mystery of Christ’s Obedience

In a few hours, we’ll stand before the Lord, the naked Servant, Who is crucified but Whose mien, nevertheless, is one of majestic triumph, regal glory and serenity. 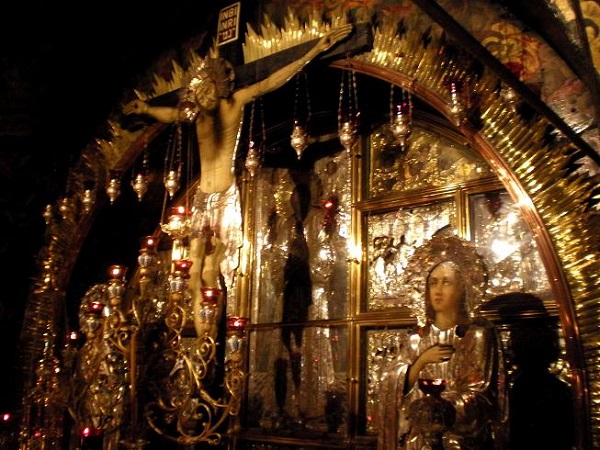 Everything starts with the Father. There’s a monocracy in the Holy Trinity. It’s not possible that this great moment in the divine dispensation could occur except through the Father.

In the first place, we have the Father turning to the human race and giving us the greatest demonstration of His love towards us. The fact that the Father agreed that His only-begotten Son should become a servant- though, naturally, without ever ceasing to be God- demonstrates the enormous love of the Father. He sent Him to become a human person, to become a servant. No-one else could have done anything like this, because people see their children as an extension of their own status.

So this was the ultimate humiliation for the Father: to humble His Son before the biggest circus of all time and before the whole world. The boundless and total love of the Father towards the human race is confirmed precisely by the humiliation, the disparagement and the servitude of His Son.

Through the prophet [Is. 52, 13], the Lord says ‘Behold, my servant will comprehend’. In other words, my Son, Whom I made a servant, will understand, will accept, will apply what I, the Father, want. He will make My will His own. ‘Complete comprehension’, then, is the answer of the Son to the love begun by the Father’s self-emptying.

Christ didn’t come to be sacrificed ‘as a representative’, as one theory has it, because then there’d be a form of pre-destination and Christ would be forced to be crucified. It also follows that the person who crucified Him would not be responsible, since there was nothing to be done about it.

The Father didn’t send His Son to be crucified. The Father sent His Son to give Him flesh and so that something could happen which no human intellect had yet been able to conceive: that God would become a human person among other human beings. This would mean that the Father would receive human nature into His bosom, together with His ever-present Son. In other words, human nature would be assumed and deified.

What was to happen then? Was there a risk that the ‘servitude’, the incarnation of the Son, would be to no avail? Would the salvation of the human race become impossible?

Just as the divine Persons had decided ‘let us make a person in our image and likeness’ and just as they’d agreed that the Son was to descend to the human race, so now, in some way, a new agreement had to be reached.

The time came for ‘Let this cup pass from me’. But here was the ‘comprehension’, the acceptance and the understanding of the Son. Realizing the monumental importance of His mission and the crucial nature of the moment, He says: ‘Your will be done; not as I wish, but as You wish’. So this has nothing to do with the theory of expiation or atonement, which are legal rather than revelatory terms, but everything to do with the obedience of the Son to the Father. So greatly did the Father love Him and so greatly did He love the Father, that He submitted ‘unto death, death on the cross’.

The first agreement took place when the Only-Begotten was sent to us. The love of the Father was that He sent His uniquely-precious Son, and the perfect love of the Son was that He agreed to submit to the Father’s proposal.

The event which began with the Father, Who made His Son a servant when He became incarnate, is completed now through this final acceptance by the Son, through which the redemption of the human race was achieved.

As we cast our glances on Christ crucified, let our own soul also look at the ‘struggle’ which was necessary between the Father and the Son so that, in a way, Their love could be completed. The Father had to think of the most tragic thing He could for His Son and the Son had to accept what would happen by emptying Himself completely. And in those final moments, while He was pouring out the last of His vigour, it was necessary that this exchange of wills should again occur: the Father to ask again and the Son to give again. This is the majesty and the glory of the concurrence of the Father and the Son. The Two are Two, but They’re also One.