Sunday of the Veneration of the Cross

In the middle of the time of Great Lent, we have the Sunday of the Veneration of the Cross. The rubrics for the day begin as follows: ‘Since we, too, are, in a sense, crucified through the forty-day fast, mortified by the passions…the precious and life-giving Cross is brought forward as though elevating and supporting us’ [1].

Christ’s Cross, which we venerate on this Sunday, isn’t to be found only in the middle of Great Lent, but informs the whole of the period. It’s immanent in the whole of the history of God’s providence for our salvation. Last Sunday, we celebrated Saint Gregory Palamas, who had this to say on the subject: Christ’s Cross ‘was foretold and foreshadowed from ancient times and no-one has ever been reconciled to God except through the power of the Cross’ [2]. 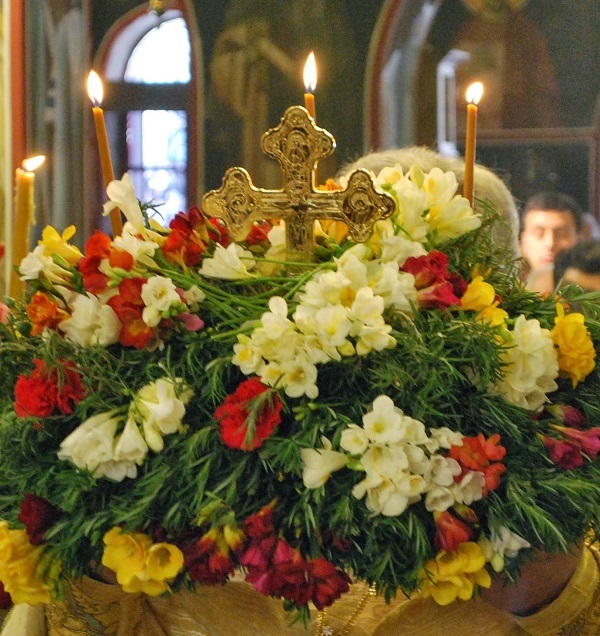 Christ’s Cross, or rather the mystery of the Cross, is the only path we have towards our salvation and renewal. This mystery, which culminated in Christ’s crucifixion, was foreseen and foreshadowed even in the Old Testament. So while Saint Gregory holds up Abel, Seth, Enoch and all those until Noah as being pleasing to God, he also presents in detail Abraham, Isaac, Jacob, Joseph and Moses, who were tested harshly in their lives and adumbrated Christ’s death on the Cross.

The pre-eminent ‘hour’ of Christ, the ‘hour’ of His manifestation as the Redeemer and Saviour of the world, is the hour of his death on the Cross [3]. Christ entered real life though His death, which is when His glory was revealed. The culmination of His self-emptying (‘God, my God, why have you forsaken me?’) [4] was also His entry into the glory of the Father (‘Father, into your hands I commend my spirit’) [5].

The gift of the resurrection and unending life was granted to us through Christ’s death and His descent into Hell. This is how ‘the whole of Adam’s race’ was raised. This is why, in icons of Christ’s descent into Hell, which, for the Orthodox Church is the icon of the Resurrection, what’s written is not ‘Christ’s Resurrection , but simply ‘The Resurrection’. That which was achieved in Christ, applies to the whole world. And this is why it must be repeated, at least to some extent, in every Christian who lives in the world as a member of His body.

In the final analysis, we Christians are called upon, but also enabled, not only to pass through the Cross in order to experience the Resurrection, but to experience the Resurrection on the Cross, the glory that’s to be found in total self-emptying, which makes the manifestation of the glory of God possible. Christ was glorified on the Cross, where His task was accomplished [6]. He resurrected us through the Cross; He liberated us by decrying ‘sin in the flesh’ [7].

The devil wasn’t defeated after Christ’s death, but with His death. Christ didn’t defeat death after His death but with His death: ‘trampling down death by death’. And He vindicated us before God when He was abandoned by God and died as a human person, as someone who was dying unjustly. This is how the tomb of Christ became the fount of our Resurrection.