Meeting with the Samaritan Woman (1) 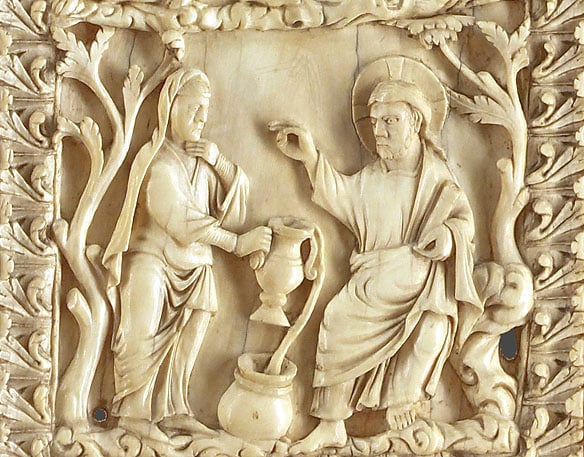 Any encounter with Christ astonishes people. If you’re not astonished, you should ask yourself whether you actually encountered Christ, if you really felt His presence. This astonishment isn’t inexplicable, nor absurd, but rather it’s understandable and rational. It’s something that occurs when the natural meets the supernatural, the relative meets the absolute and the transitory meets the eternal.

When people who are overcome with the fear of death meet the Lord of Life, when the creature gazes upon its Creator, the relationship is incommensurate, unexpected surprises occur. And these surprises become all the more moving when the Lord humbles Himself before His creation, in order to serve it. Indeed, the surprises here aren’t restricted to the general nature of things, but also extend to their particular details.

The surprise is twofold, or rather manifold. How is it that a Jew, Jesus, should address a person from Samaria? Even more so, why should he be conversing with a woman, particularly one who has a chequered past, as He knows full well. And finally, how is it that this woman uncovers the most profound truth of the Messianic message?

Any surprise we experience is always due to an encounter with something new, to the manifestation of some reality, some person, some truth that we hadn’t known till then. In other words, it’s due to some sort of revelation. This is also what we notice in the case of the meeting we’re examining. 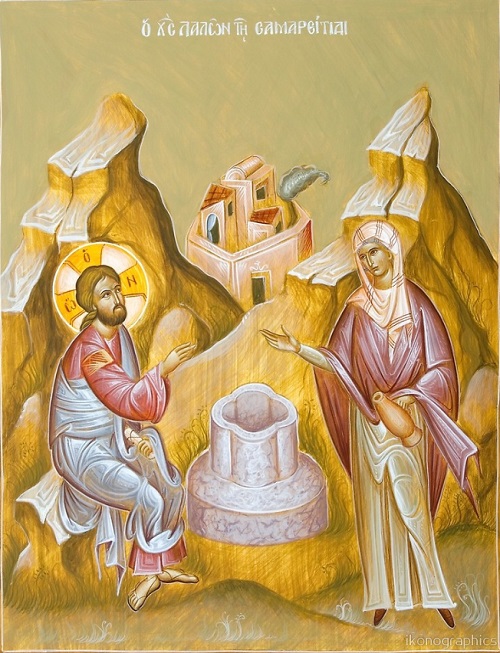 Jesus and the Samaritan Woman, icon by the hand of Julia Bridget Hayes, www.ikonographics.net

The Samaritan woman is surprised at the presence of a Jew, who breaks down the barriers of non-communication with her people and begins a conversation with her. He asks her for some water to drink. Before she can recover from this surprise, she’s faced with another one, even greater. She hears that the person who’s asked for water is in the position of offering ‘living water’ Himself. This surprise wasn’t caused by any new revelation, however, but by the fact that it puzzled her. ‘Sir’, she says, ‘you haven’t even got a bucket and the well’s very deep. Where’ve you got this living water from?’

‘Living water’ means running water. Water in a well isn’t running. Therefore it’s not ‘living water’. But this isn’t what puzzles the Samaritan woman; she’s still thinking about the water in the well. Her mind’s not on any running water. And it if it had been, she still wouldn’t have understood what Christ was talking about. On the other hand, when He said ‘living water’, Christ didn’t mean some running water that slakes bodily thirst for a short time, but water that creates within people a never-failing source of eternal life. Water that does away with death.

Thinking she’d understood Christ’s words, the Samaritan woman asks Him to give her this magic water, so as to free her from the wearisome task of fetching water. ‘Sir’, she says, ‘give me this water, so that I won’t be thirsty and won’t have to come here to carry water’. The woman thought she’d found an easy answer to her problem. Christ had spoken to her about water that welled up in people and became a source of eternal life. She imagined natural water, that she’d drink once and then would never feel thirsty again, nor need to go to the well for water.

As long as people restrict themselves to worldly affairs, they can’t comprehend eternal, transcendent truths. They can be surprised, be puzzled or amazed. They can even expect magical solutions. But they remain locked into the perceptible world, bound by direct physical contact. They deal with routine, everyday problems. Their minds go no further than that. Their spiritual senses don’t function. Even if they hear about something that transcends direct sensation, something beyond the things of this world, they conceive of it in terms of the senses and in a worldly manner. They do, indeed, have questions, they experience surprises and receive revelations, but they still function within space and time. They think, comprehend and live in subjection to the law of death and corruption.

The obstacle which hinders and halts people’s every thought and action, every surprise they experience or revelation they are granted, is the hurdle of death. No revelation, no invention, no art or philosophy can break through this barrier. Everything that is known or available to us lies ‘this side’ of the confines of death.

Death isn’t transcended by logic or argument, by science or magic. All of these serve worldly purposes.  Death is transcended by a miracle, by the greatest miracle of all, the Resurrection. This is why Christ’s resurrection is the most profound revelation, or, to be more precise, the only true revelation, because it opens up an entirely new reality for us. This is why every one of Christ’s miracles is a sign, that is, an arrow pointing us ‘beyond’ the purlieus of death and corruption, to resurrection and eternity.