Meeting with the Samaritan Woman (2) 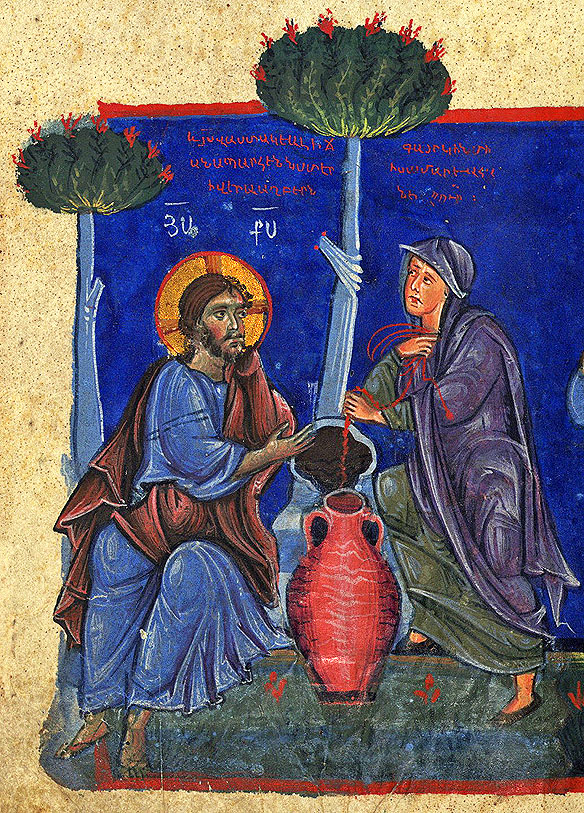 While the Samaritan woman was talking to Christ, she basically didn’t understand what he was saying. He was talking on the level of eternal life. She automatically transferred what she heard to the level of this transitory life. There was no meeting point. This point was created through a ‘sign’- a miracle- that Christ revealed to her. He said, ‘Go and fetch your husband and come back here’. She replied that she didn’t have a husband.  Then Jesus said to her, ‘You’re quite right in saying that you don’t have a husband. You’ve had five and the one you have now isn’t your husband. It was true, what you said’.

The words of the Lord shifted the Samaritan woman onto another level. They presented her with new opportunity, one not defined by rational necessity. They offered her the prospect of perpendicular vision and reference. The woman then abandoned the existential problem of water, or rather forgot it completely, as is clear from the rest of the narrative, and asked for another problem to be solved, for another thirst to be slaked, her metaphysical thirst.

She says, ‘Sir, I see you’re a prophet. Our fathers worshipped God on this mountain, but you [the Jews] say that Jerusalem’s the place where God should be worshipped’. Then she’s granted a great revelation: ‘The time’s coming, and has already come, when those who truly worship the Father will do so “in spirit and truth”. God is Spirit and those who worship Him should worship in Spirit and Truth’. People become those who believe and worship. When they believe in and worship God ‘in Spirit and Truth’, they also become, to some extent like Him. They become spiritual and real.

The religious belief of the woman then comes to the fore and she says, ‘I know that the Messiah- that is Christ- will come and that when he comes he’ll explain everything to us’. And Christ tells her, ‘You’re speaking to him’.

This revelation which the Samaritan woman was given coincided with the surprise experienced by Christ’s disciples, who arrived there at that moment. They were puzzled as to why their Teacher was talking to this woman. And this surprise of theirs was a useful ‘sign’. It was a preparation that would help them understand that the Gospel they were to preach transcends strict racial, social and religious boundaries.

The more people devote themselves to the concerns of this life, the more they’re anchored in the things of this world and forget their more profound needs. But when, for whatever reason, their deeper spiritual disquiet is aroused and they recognize that there is an answer to the forgotten and often rejected existential question in their hearts, they then forget their everyday needs and reject their worldly cares.

‘The woman left her pitcher there, went into the city and told people: “Come and see a man who told me everything I’ve ever done in my life. Maybe he’s the Messiah”’. Obviously, the woman herself was convinced that He was the Messiah, because that’s what she’d come to tell the people in her town. She wanted to share her great joy with them. But, being human, she also perhaps wanted to have the fulfilment of their common expectation confirmed by others. And her confirmation came with the experience afforded to her fellow-citizens from their own encounter with Christ. A joy shared is twice a joy. Joy that belongs to everyone and each one. ‘We no longer believe because of what you said, since we’ve heard for ourselves and know that this is truly Christ, the Saviour of the world’.

Real faith doesn’t depend on report or information but on personal experience. ‘Taste and see that the Lord is good’ says the Psalmist. ‘Come and see’, says Philip to Nathaniel. Unless you see God in your life, say the Fathers of the Church, don’t expect to see Him after you die. It’s here that our spiritual receptors are tuned to receive God and to perceive the riches of His kingdom.

People today, in particular, have closed down their spiritual receptors and have nothing at all to do with spiritual reality. By and large, nothing surprises them anymore, nothing in their everyday lives, because they’ve computerized their lives and turned them into mind-numbing routine. In the same way as it would be a catastrophe for a priest to just get used to the Divine Liturgy and the services he performs, so for each person it’s a disaster if they get used to their everyday lives and become indifferent to the opportunities and surprises they’re being offered.

Human life is a function that lasts as long as we’re here. And it’s full of small and great surprises, positive and negative. The positive ones we often see negatively, and the negative ones we could view and experience positively. Anyone who retains the ‘living water’ which was poured into them at Baptism can experience their daily routine creatively, with all the positive and negative surprises, slaking their thirst with ‘the living water’, absorbing the truth of eternal life and giving meaning and substance to evanescence.