Sunday of the Samaritan Woman

We owe greater honour to the other, as Christ rendered to the Church

In the middle of Great Lent, the Church instituted the veneration of the Holy Cross, so that it may increase our inspiration and strengthen us in our struggle to prepare our souls to enter in the quickening presence of the Risen Lord. Similarly, in the middle of the period of the Pentecostarion, we celebrate Mid-Pentecost which renews our thirst for the Light of the Comforter, and in this way strengthens us to continue in prayer with ever-increasing desire ‘until we are clothed with power from on high’. For if the Holy Spirit does not come to unite us eternally with Christ, we cannot ‘walk in the newness of life’ granted to us by the Cross and Resurrection of the Lord. 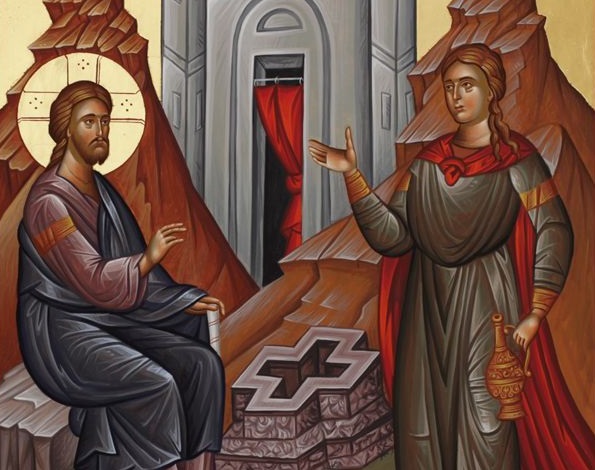 The Jews considered the Samaritans to be unclean and heretical. Especially conversing with a Samaritan woman was seen as utterly degrading. Rising above all conventions, Christ demonstrated that what differentiates people is their spiritual gift. When the grace of the Holy Spirit is at work, every human differentiation is abolished. The Christian people are not the Greeks, nor the Russians, nor the Romanians, but all those who have received Holy Baptism. Having put on Christ, they become ‘a chosen generation, a royal priesthood, an holy nation, a people belonging to God’.

In His journey from Judea to Galilee, Christ passed through Samaria. As He sat down by Jacob’s well in order to rest while waiting for His disciples to buy food, a Samaritan woman with tainted life came to draw water. The omniscient Lord, Who hungers and thirsts unto death for the salvation of each soul, humbled Himself in front of this woman and asked her: ‘Give me to drink.’ In His desire to heal her wounds of sin, He honoured her so as to restore her dignity and prepare her to receive the revelation of His truth.

As the woman was perplexed that a Jewish rabbi would even speak to her, the Lord began to tell her about the ‘living water’, the gift of the Holy Spirit. The Lord’s paradoxical word aimed to stir up in the Samaritan woman a spiritual tension and a disposition to collaborate with Him in the miracle that was going to take place, namely, the renewal of her soul, the transformation of a heretic and wanton woman into the holy martyr and equal to the Apostles Photini. Then, as Christ knew that she could not receive the incorruptible gift of the Spirit unless she approached with a pure heart, He began to correct her life in a delicate way, without judging her.

There is contemptuous and crushing reproof, and there is a prophetic reproof that regenerates and inspires. When the word of God is at work, it illumines and reveals the sin of man, but it also heals him at the same time. This reproof consists of a prophetic saying, which enlightens the listener to willingly embrace this word and to strive to fulfil it with inspiration.

God’s chastening and the tribulations He allows in man’s life are neither revenge nor punishment. On the contrary, they are the expression of His desire to bring the apostate of His grace to a state wherein he can receive His gift, appreciate it, preserve it and multiply it unto his own salvation and the salvation of his fellows.

When the Lord asked the Samaritan woman to call her husband, she tried to conceal the truth of her sins. Yet Christ did not humiliate her, but honoured the little grain of truth contained in her lie, repeating with emphasis, ‘Thou hast well said’ and, ‘In that saidst thou truly.’ The Lord accepted and cultivated the seed of the truth of the Samaritan woman, until it ripened and evolved into the awareness of His Truth.

Her heart changed and her mind opened through the energy of the presence and word of the Lord. She began to seek the correct orientation in order to define her path aright. In spite of the moral disarray of her life, the Samaritan woman had thirst for God and theological thoughts, which ‘as a sweet savour’ attracted the Spirit of God to rest upon her, so that she might receive from the Lord Jesus the highest revelation: ‘I am the Messiah.’ God cannot be understood with the mind, but He convinces through His presence. The word of His grace becomes a law of life inscribed ‘in the fleshy tables of the heart’. The Samaritan woman expected the coming of the Messiah. Her contact with the Lord illumined her mind and the Holy Spirit enlarged her heart. To the calling of Christ she responded in the same way as the Apostles. She left everything behind and ran to declare to her people the good tidings that she had found the Messiah.

This account shows clearly how, from the moment he receives the word of Christ, man’s mind is gradually raised to the true knowledge of God. In the beginning, he feels in his heart the divine power of this word and his faith is strengthened. Then, he seeks the right doctrine which cleanses his inner eye, and he thus begins to discern the form of the Lord. When he confesses His truth, Light flows into his soul and makes him a child of the day. Then he is united with God Who first loved and honoured him, and he worships Him ‘in Spirit and in truth’.

Moreover, the way Christ speaks with this woman gives us an example of a prophetic converse with our fellows. Christ first honoured the Samaritan woman, then He corrected her with nobility of heart, and when she accepted His instruction and her mind was transferred to a spiritual understanding, He revealed unto her both that He was the awaited Messiah and that the true worship of God is ‘in Spirit and in truth’.

The Prophets of all generations faced the same problem of how to impart to their fellows the truth they had come to know. They would often pretend that they needed a favour that the other can offer, so as to put themselves lower and thus impart to them a spiritual gift.

All the earthly life of Christ, as it is described in Scripture, testifies that the Lord ‘came not to be ministered unto, but to minister, and to give His life a ransom for many’. It teaches in a practical way the word of the Apostle Paul: ‘In lowliness of mind let each esteem other better than themselves. Look not every man on his own things, but every man also on the things of others.’

In His contact with people, the Almighty Lord would put Himself lower than the person He would speak to, so as to bring them to a sense of honour, open their heart to the divine word and thus be able to impart to them newness of life. He did not reprove Nathanael, who approached Him with arrogance, but on the contrary, He honoured him and made him His Apostle. He did not reproach Nicodemus for his cowardice, when he came to see Him in secret so as not to lose his social rank. He honoured him too with the revelation of His truth and although Nicodemus remained His hidden disciple, he was faithful to Him unto death. He did not blame the Samaritan woman for her wanton life, neither for the lie that she told Him. At every stage of His conversation with her, He never imposed His divine will on her, but left her free either to accept or refuse His gift. In this way, He honoured her, restored her nobility as a person in the image of God and raised her to the dignity of Apostle and Martyr.

Christianity is not one of the many earthly organisations. It is a strange manner of existence, an imitation of the angelic life. The attitude of the Lord is an example for the faithful, especially for those who undertake pastoral ministry within the Church. The strong ought to bear the burdens of the weak, humbling themselves before all like the Apostle Paul so as to save some. The authority they receive is not given them in order to crush the other, but to comfort him, bear his burdens, strengthen him, inspire him, renew him by their word, perfect and edify him by ministering unto his salvation.