The Cure of the Blind Man

‘They saw a man blind from birth’
The curing of the man blind from birth is a terrible rebuke for the Pharisees, who didn’t want to accept the words of Christ. Before this momentous event, Christ had had an extensive dialogue with the Scribes and Pharisees, in the course of which He said to them: ‘I tell you absolutely truly: before Abraham was born, I am’ (Jn. 8, 58). The infuriated Jews didn’t understand Christ’s words and picked up stones to throw at Him (op. cit., 59). In order not to stoke their anger, Jesus hid and left the temple grounds (ibid). It was after this that he met the man blind from birth and cured him, in part so that the healing might be an answer to the enemies who had disparaged Him. 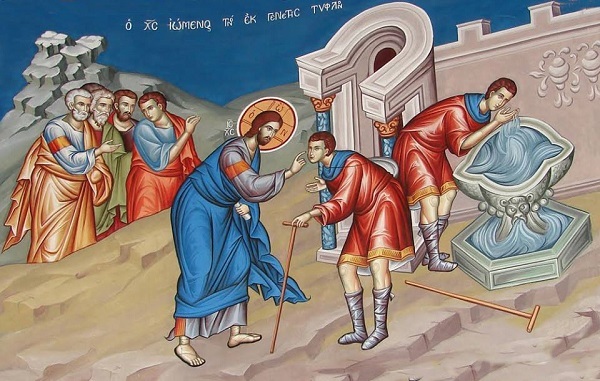 The man blind from birth
Christ’s disciples thought that the man himself or his parents must have sinned for him to have been born blind. Christ, however, excludes both of these possibilities. The man was born blind in order for God’s glory to become manifest. The disciple’s reasoning was erroneous, because how could someone sin before even being born? Only pagans had such doctrines and nonsensical dogmas. The Lord is quite clear on this. We’re all personally responsible for our own sins. It’s the sin we commit which troubles us. Saint Cyril the Alexandrian[1] writes that it’s of great benefit to people when they know the true teaching of God. They don’t fall into error, nor do they interpret facts in a mistaken way.

The manner in which the blind man was healed
The way Christ healed the man is worth noting. Christ could have healed him with a word, without using mud and rubbing it on his eyes. First he wanted to inspire faith. Then, by this action, He demonstrated His creative power. Just as a builder might complete a half-finished house (using new materials), so, according to Saint John Chrysostom, in the miracle of the blind man Christ ‘binds our body together and completes it’. He created Adam from the earth, and with the earth He created eyes for the blind man. Then on the Sabbath, He told him to go and wash his face in the pool of Siloam. The blind man obeyed immediately. On the way to the pool from the place where Christ had told him to leave, he would certainly have encountered lots of people who would have asked him where he was going and why he had mud on his eyes. The Lord wanted this sign to be very indicative. After the cure, the man would return by the same route and his progress would, in a sense, become a kind of procession for the miracle; it would become known without any particular fanfare. Of course, by their constant questioning of the man, the Pharisees unwittingly ensured that everyone got to hear of it. Indeed, as the Fathers say: ‘God makes the opposing from the opposing’. The blind man was cured through the Lord’s live-giving energy.

The spiritual Siloam
The Lord is the spiritual rock and the spiritual pool of Siloam where people are cleansed of their sins. Christ is a torrent in spate, cooling and refreshing every one of us. Saint Basil the Great suggests that, whatever our illness, we should have recourse to divine Grace, as well as to doctors. One bishop says that the great tragedy of humankind is our sin. Not simply that we’ve sinned, but that the sin remains. The conflict between the blind man and the Pharisees isn’t about finding the truth, but about sin. The Pharisees aren’t really concerned about the Sabbath day of rest, but about the fact that their ego has been wounded. Our own egotism prevents us from accepting God’s actions and miracles. We see the little things, but miss the big ones. Our good will is confined and we refuse to accept God’s love for us. Deep down, we believe only in ourselves and in our own gifts.

Let us break down this ego complex and accept the error of our ways. Let us allow God to act upon us, as He knows and in whatever manner He wishes. If we become tools through which the glory of God might be made manifest, then let us bear the greatest sacrifices.

[1] Also known as Cyril of Alexandria. In this case, both are correct. He was ‘the Alexandrian’ because he came from the city; he was also ‘of Alexandria’, because he was the bishop of the city.