Discourse 27 on the Gospel of Saint John [2]

God so loved the world that he gave his only-begotten Son, that whosoever believes in him should not perish, but have everlasting life.

What he’s saying is this: ‘Don’t be surprised that I’m to be lifted up so that you may be saved. Because this seems good to the Father’, and he has so loved you as to give his Son for the sake of servants, and ungrateful servants at that. Nobody would do this even for a friend, nor readily even for a righteous person, as Paul declared when he said: ‘Very rarely will anyone die for a righteous person [Romans 5:7]. Paul was speaking at greater length, because he was talking to believers; here, Christ is more reserved, because his words were directed particularly to Nicodemus, but still in a more emphatic manner, since each word has a great deal of significance. By the expressions, ‘God so loved’  and ‘the world’, he shows the great intensity of his love. The gap between the two  [God and the world] is enormous . He who is immortal, without beginning, is infinite majesty; we’re but dust and ashes, full of ten thousand sins, ungrateful, and have at all times offended him, and yet we are the people he loves. Again, the words which he added after these are similarly significant, when he says, that [the Father] gave his only-begotten Son, not a servant, not an angel, not an archangel. And yet no one could show such anxiety for their own child as God did for his ungrateful servants. 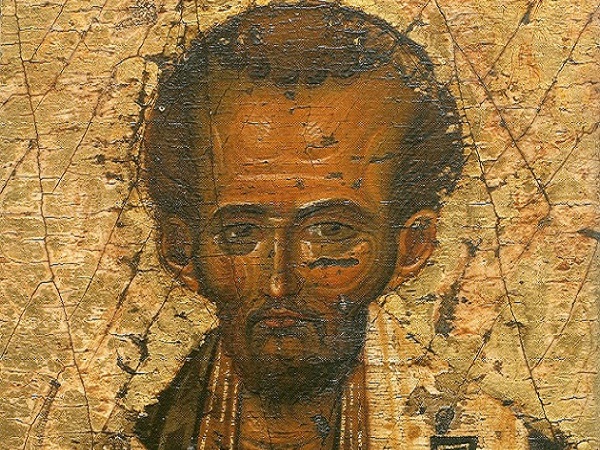 He presents his passion not very openly, but rather darkly, but states the benefit of the passion more clearly when he says that everyone who believes in him won’t perish, but will have everlasting life. When he’d said, ‘must be lifted up’ and alluded to death, [he was concerned] lest Nicodemus might be made downcast by these words and might have thought of him in purely human terms, assuming that his death was a cessation of existence. But look how he sets this right, by saying that the person who was given was the Son of God, the cause of life, of everlasting life. He who gave life for others by death, would not himself be in death for any length of time. If they who believe in Christ crucified don’t perish, much less does the one who was crucified. He who takes away the perdition of others is himself much more free from it. He who gives life to others, radiates life much more to himself. Do you see that everywhere there’s a need for faith? He says that the cross is the fountain of life, but this isn’t something that reason can easily accept, as witnessed even now by the Greeks [pagans], who laugh at it. But faith, which transcends the weakness of reasoning, can easily receive and retain it. And how was it that God so loved the world? Purely and simply out of his goodness.

We should feel abashed in the face of his love, ashamed of ourselves when confronted by the excess of his kindness. For our sakes, he didn’t spare his only-begotten Son [Rom. 8, 32], yet we begrudge [spending] money even on ourselves. He gave his own Son for us, but we don’t despise money, either for his sake or for our own. How can this deserve forgiveness? If we see somebody enduring mortal dangers for us, we hold them in the highest regard, count them among our chief friends, place everything we have in their hands, and consider it more theirs than ours. And even then we don’t think we’ve repaid them properly. But we don’t show the same degree of gratitude towards Christ. He laid down his soul for us and poured out his precious blood for the sake of us, who were neither well-disposed nor good, whereas we don’t even spend money on ourselves, let alone on him who died for us, when he’s naked and a stranger. Who will deliver us from the punishment that is to come? If it weren’t God that punishes, but we ourselves, wouldn’t we be forced to condemn ourselves? Wouldn’t we sentence ourselves to the very fire of Gehenna, for allowing him to starve after he’d laid down his life for us? And why am I talking about money? If we had ten thousand lives, ought we not to lay them all down for him? And yet even if we did, it would be less than his benefits deserve. People who confer a benefit in the first place give evident proof of their kindness, but those who receive one, whatever recompense they make, are repaying a debt, not bestowing a favor. This is especially true when those who did the first good turn were benefiting their enemies. If you repay [properly] you both bestow your gifts on your benefactor and reap their fruit yourself. But not even this is an incentive for us. We’re so ungrateful that we put gold necklaces on our servants and mules and horses, but neglect the Lord who goes about naked, passing from door to door, ever standing at exits, hands outstretched. While we often regard him with unpitying eyes, he undergoes these things for our sake. He gladly goes hungry so that you may be fed; he goes naked so that he can provide the wherewithal for a garment of incorruption for you; and even then you don’t give up anything of yours. Some of your clothing’s moth-eaten, other pieces are a waste of space, a needless burden. And all the while he who gave you these, and everything else that you possess, goes naked.

But perhaps you don’t put them away, but wear them and make yourself look good in them. Tell me, what do you gain by that? Is it so that vulgar people can see you? Then what? They won’t admire you for wearing such apparel; but they will admire those who supply clothing to the needy. If you want to be admired, clothe others and you’ll earn rich applause. Then God will praise you and so will other people. As it is, nobody praises, but everybody takes issue with you for adorning your body but neglecting your soul. This is how harlots add to their beauty. Their clothes are often more than usually expensive and splendid; but only those who live in virtue adorn their soul.

I keep saying this, and won’t refrain from doing so, not so much because I’m looking out for the poor as because I care for your souls. The poor will have some comfort, if not from you, then from some other quarter. Even if they aren’t comforted, but die of starvation, it’s of no great consequence. How did poverty and wasting away from hunger do any harm to Lazarus? Nobody can rescue you from Gehenna, unless you obtain the help of the poor. We’ll say to you what was said to the rich man [Luke 16,  24-26] when he was frying* and unable to find any consolation. God forbid that anyone should ever hear those words, but rather may we all go to the bosom of Abraham. By the grace and lovingkindness of our Lord Jesus Christ, through whom and with whom be glory to the Father and the Holy Spirit unto the ages of ages. Amen.

* This may seem a rather bold translation, but in fact it is precisely the word Saint John uses.