“The First Time He Came to Save the World; the Second He will Come to Judge it.” (Meat-Fare Sunday) – 2

He Himself said: “The Father gave all judgement to the Son”. The same Son Who came to save the world will judge it. And He’ll judge it lightly, so that most will be saved, because God wishes the world to be saved. The only people who won’t be saved will be those who don’t want to be, who won’t be taught and who will not see the signs pointing to belief in Christ. What they say now, they’ll say then: “Lord, when did we see you?”. When and where did we see Christ? 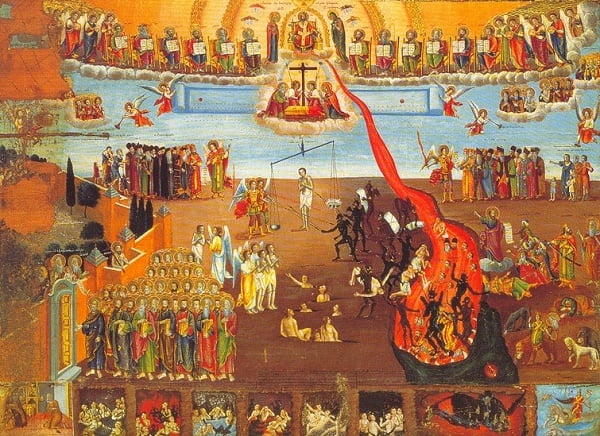 This is where the Gospel reading about Christ’s second coming takes on an incomparable profundity and the greatest social significance. Not fine words and theories, just small, everyday things. Not any great sacrifices and spectacular actions, but bread for the hungry, clothing for those without, a cup of water for the thirsty. The least that each person can give, not the most that a few can and should. When we condemn social injustice and inequality- and we’re not wrong to do so- we forget that a portion of the blame falls on everyone. And it’s the case that people who only shout about these things aren’t always the poorest or most unfairly treated. But that’s natural when the social message doesn’t begin with belief in God or as the implementation of God’s commandment concerning justice and love. Then it’s lost in a vague and theoretical message, external to persons and things, which is how life is. And, again, it’s natural, if we don’t believe in God or in other people. People then become, not our siblings or those of Christ, who are in pain, but the theoretical teaching of some social system in which we believe.

The only truth is that death awaits us and after that the judgement. Come what may, we have to give an account of our lives. We’ve learnt to regard natural laws as inviolable, but even more inviolable and incontrovertible are the moral laws, because nothing happens by chance. We can’t seriously adopt the materialist stand of gaudeamus igitur: “Eat, drink and be merry, for tomorrow we die”. At some point we’ll find our life before us and God will judge our actions “through Jesus Christ”. And if Christ judges us as God, none of us will be saved. But He’ll judge us as God and as a human person, within the human perspective. And He’ll ask if we had love. Saint Paul writes that love “covers a multitude of sins”. Love isn’t a mere word or theoretical message, but is, each and every time, a particular action towards our fellow human beings and neighbours, who are our siblings “in the name of Jesus Christ”. Not faceless people or humanity, but our neighbours, personally, and our brothers and sisters. Let us therefore have love, let us believe in God, Who for love of us became human, to save people one by one. So that we can hear Him say to us: “Come you who are blessed…”. Amen.

* For those who were brought up in Protestant Churches, this has a very negative ring. In fact, it simply means that God will decide how to “repay” and often has a positive sense, as in “for a good deed” [translator’s note].