On the Sunday of the Paralytic

Today’s Gospel of the healing of the paralytic raises a number of questions.

The first perhaps is:
Where does illness come from? 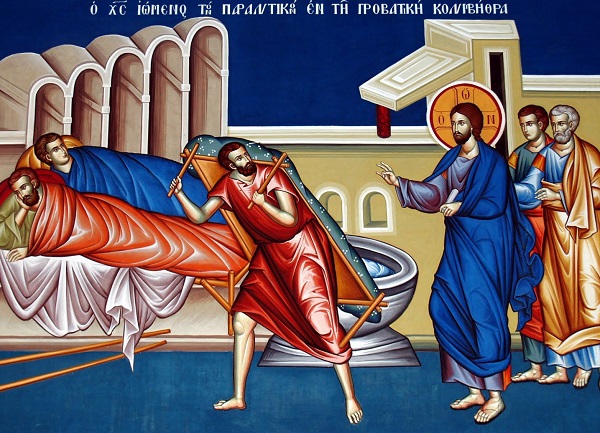 The answer to this question is contained within the selfsame Gospel, in the words of Our Lord to the healed paralytic: ‘Sin no more lest a worse thing come unto thee’. In other words, the origin of illness is in sin.

We can see this very clearly in the cases of those who destroy their organisms through the taking of drugs, such as tobacco, alcohol or heroin. But most illnesses are not voluntary, they are involuntary. Thus anyone can catch a cold. And we all know people who have lung cancer but have never smoked a cigarette in their lives. Another example: at this very moment our prayers are with Archbishop Alypy [of Chicago] who lies paralysed after falling from a tree that he was pruning. This was not his fault, and yet he is now an invalid, requiring healing. The fact is that the vast majority of illnesses and infirmities are involuntary, not the result of personal sin, but the result of the general sin that is in the world, the consequence of the Fall of Adam. This is part of our general human condition and this can happen to anyone.

The answer to this question too is given in today’s Gospel. The way out is Christ, He who healed the paralytic. Not only can He heal illness, because He overcomes sin, but also He can overcome the ultimate consequence of sin – death itself.

Today’s miracle of the healing of the paralytic is most apt for today’s world, for this world lies like a paralytic, in a spiritual and moral paralysis, seeming not to know how to overcome the problems that it has invented for itself.

Thus at this moment different countries stand on the brink of the horrors of war and catastrophe, of incalculable evil. Do they not know that peace is better than war?

Thus every single country in the world has among its leaders the criminal and the corrupt. Do they not know how to live according to good and not bad? Have they never heard the words: ‘Do as you would be done by?’

Every single country in the world, it would seem, now has a spiralling crime rate. Do we not know how to teach our children the difference between right and wrong?

Given the many problems of today’s world, some people ask: ‘But why does Christ not intervene to heal the illnesses of the world?’

The answer to this question too is also contained in today’s Gospel. If you remember, before Christ healed the paralytic, He first asked him if he wanted to be healed. Christ does not heal those who do not want to be healed. He gives us freedom. Thus:

Do the countries that wish to slaughter the peoples of other countries want to be healed of their passion for bloodletting, ethnic hatred and territorial conquest?

Do corrupt politicians and arms merchants want to be healed of their greed for power?

Do criminals want to be healed of their unending desire for material riches?

But rather than take the easy path of judging and blaming others for all the world’s ills, perhaps we had better take the difficult path of first looking to ourselves:

Do we, honestly, want to be healed of our own sinfulness and passions, of our indifference to God, our crucifying lack of faith in the Church of Christ?

If we show no sign that we want to be healed, then we too will continue to lie paralysed in the same old rut as before.

And if the world shows no sign that it wants to be healed, then it too will continue to lie in the paralysis of its old hatreds and evil ways.

O Lord, save us from our own iniquities and idleness.