Lazarus Saturday has a very special place in the liturgical calendar. It is not included in the forty days of Lenten repentance; it is not included in the harrowing days of Holy Week – which are counted from the Monday to the Friday. Together with Palm Sunday, it forms a short and joyous prelude to the days of grief which follow. A topographical link unites it to Palm Sunday: Bethany is the place of Lazarus’s resurrection, and is also the point of departure for Jesus’s entry into Jerusalem. 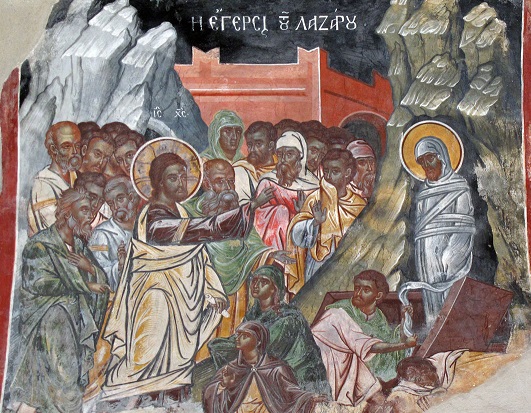 Lazarus’s resurrection, which this Saturday commemorates, is an event that, as we shall see, carries a very deep meaning. It is mysteriously linked to the resurrection of Christ himself; in relation to that event, it is like prophecy in action. One could say that Lazarus raised from the dead is shown to us, at the threshold of the Easter feasts, as the precursor of Jesus Christ triumphant over death, in the same way that, on the threshold of Epiphany, John when he baptised was the precursor of the Messiah who was about to be revealed. But, as well as its principal significance in relation to the resurrection of Christ, the raising of Lazarus has secondary aspects which will be useful to stop and meditate on…

The raising of Lazarus announces the resurrection of the dead which is a consequence of Jesus’s resurrection: ‘O Christ, when thou didst bring Lazarus back to life from amongst the dead, though didst establish the principle of universal resurrection… Thou didst raise him, Thou the giver of life, thus confirming the resurrection of the world…Through Thy friend as intermediary, Thou didst predict that humanity was released from corruption’. Lazarus Saturday is, in a way the feast of all the dead. It gives us an opportunity to confirm and give precision to our faith in the resurrection. Our Lord, in correcting Martha’s state of mind, gives us precious teaching about our own dead, for when she said to her: ‘Thy brother shall rise again’, she had replied, ‘I know that he shall rise again in the resurrection at the last day’, and Jesus said ‘I am the resurrection’. Martha’s faith was insufficient in two ways: she thought of her brother’s resurrection in terms of the future, and only of the future, and then she could not conceive of the resurrection except in terms of some sort of general law. But Jesus indicates that the resurrection is a fact which is already actual, because he himself is (and does not bring about) resurrection and life. Our dead live through and in Christ. Their life is bound up with the personal presence of Jesus, and is manifested in it. If we seek to unite ourselves in spirit with someone who is dead that we love, let us not try to revive him in our imagination, but enter into contact with Jesus, and in Jesus we shall find him. The resurrection of Lazarus is a wonderful illustration of christological dogma. It shows us how, in the person of Jesus, human and divine nature are united – without confusion: ‘O Christ, by Thy presence at the tomb of Lazarus, Thou hast confirmed our faith in Thy two natures…’. For, on the one hand, in Jesus, man can give way to emotion and grieve for the loss of a friend: ‘Jesus wept. Then said the Jews, Behold how he loved him!’ On the other hand, God, in Jesus, can command death with authority: ‘He cried with a loud voice, Lazarus come forth. And he that was dead came forth…’.

Finally, the resurrection of Lazarus allows a sinner to hope that, even though he seems spiritually dead, he could come alive again: ‘So I pray to Thee, O Thou lover of mankind, to raise me to life, I who through my passions am dead…’. Sometimes this spiritual resurrection seems as impossible as that of Lazarus: ‘Lord, by this time he stinketh; for he hath been dead four days…’. For all things are possible to Jesus – the conversion of the most hardened sinner as much as the raising of the dead: ‘Jesus said, Take ye away the stone…’.

This is what we shall learn if, on this Saturday we go to Bethany, to Lazarus’s tomb. We want to meet Jesus at Bethany and to start Holy Week with him, close to him. Jesus invites us to be there, and waits for us. Martha goes to say, in secret, to her sister: ‘The Master is come and calleth for thee’. And Mary ‘as soon as she heard that, she arose quickly and came to him’. The Master calls me. He wants me to stay with him, not to leave him throughout the days of his Passion. During these days he wants to reveal himself to me – who perhaps already stink – newly and overwhelmingly. Master, I come.