As we come to the end of Great Wednesday, we move on from this theme of the Bridegroom, and on Great Thursday we commemorate the Mystical Supper and Jesus washing the feet of His disciples. In the morning, a full Eucharistic Liturgy of St Basil the Great is served in combination with vespers. The relationship between the Mystical Supper and the Eucharist is obvious, but many Orthodox talk about this Mystical Supper as though its sole purpose was to establish the sacrament of Holy Communion. This is just silly. I am not trying to play down the reality of Holy Communion as the Body and Blood of Christ or its connection to the Mystical Supper, but there is more to the acts and words of the Mystical Supper than this. Christ showed His Apostles what He was about to do for us. In breaking the bread and saying “this is my body which is broken for you for the forgiveness of sins”, and giving them the cup and saying “this is my blood which is shed for you and for many for the forgiveness of sins”, He was illustrating what He was going to endure and to what purpose. Before He took the bread and wine, he said to the Apostles: “No man has greater love than this: to give his life for his friends”. When he commands us to “do this in memory of me”, he does not just mean, “celebrate the liturgy in memory of me”, he also means “sacrifice yourselves for others as I have done for you, in memory of me”. When Christ said “whoever does not eat my flesh and drink my blood has no life in him”, he meant more than taking Holy Communion, as important as that is. He meant also that without his love in our hearts, we have no life in us. It is with such love that we ought to take Holy Communion.

During the Gospel Reading at the Liturgy, we have the foot-washing rite. Here the bishop renders a dramatic re-enactment of Christ’s washing the feet of his disciples, presupposing with twelve priests or deacons, but in many places this is impossible, and so people are selected from the laity. According to the Gospel narrative:

‘Jesus, knowing that the Father had given all things into his hands, and that he had come from God and was going to God, got up from the table, took off his outer robe, and tied a towel around himself. Then he poured water into a bowl and began to wash the disciples’ feet and to wipe them with the towel that was tied around him. He came to Simon Peter, who said to him, “Lord, are you going to wash my feet?” Jesus answered, “You do not understand now what I am doing, but later you will understand. Peter said to him, “You will never wash my feet’. 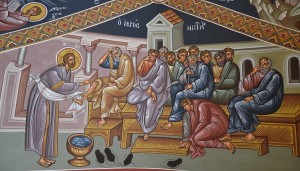 As I already mentioned at the beginning the wonder of God doing things for us that are plainly beneath Him. The task of washing someone’s feet is hardly a task fit for a King. It is the task of the lowest servant or a slave, and so Peter refuses to allow Christ to wash his feet.‘Jesus answered, “Unless I wash you, you have no share with me”.
In other words, “if I am to bring you up to my level, I first must come down to yours”.
Simon Peter said to him, “Lord, not my feet only but also my hands and my head!”’
What St Peter is saying here, in other words, is, “if washing me is a yardstick for measuring how close I am to you, then never mind the feet, I want the full monty!”

I spoke of the foot-washing rite as a dramatic re-enactment, but it would be a mistake to suppose that there is nothing more to it. It is no coincidence that it is the bishop who performs the rite of foot washing. Christ said that, “whoever wants to be the first must be the last, and whoever wants to be the greatest must become the servant of all”. The bishop is the holder of the highest office in the Church. He is Christ’s representative and stands in the place of Christ Who, in His own words, “came not to be served, but to serve”, and so bishops ought to do the same.