FEAST OF THE MYRRH-BEARING WOMEN, ST JOSEPH OF ARIMATHEA AND ST NICODEMUS
11th May 1997

We keep today the feast of a number of the followers of Christ of whom we think seldom, because they are mentioned very little in the Scriptures. And each of them could be a lesson for us.

St. Joseph of Arimathea was a rich man who listened to Christ with an open mind and did not commit himself. Neither did Nicodemus; but Nicodemus was a learned man, part of the Sanhedrin. He had been listening to Christ, he had been asking questions from Him, he wanted to understand, he wanted to be sure. But neither of them had committed themselves to follow Christ, to declare themselves as His disciples. 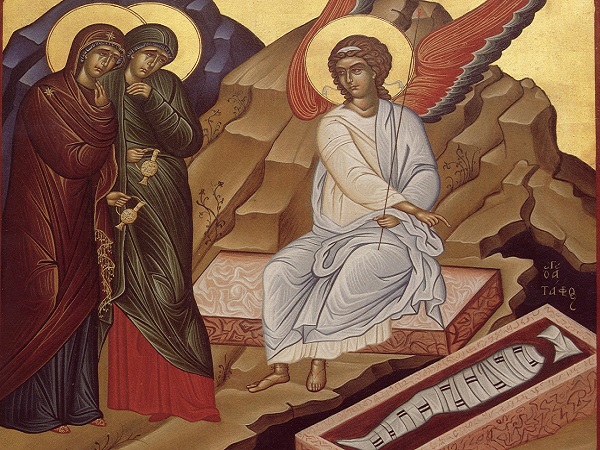 And yet, when Christ in the eyes of everyone was defeated, when victory had come to His enemies, when He was dead, about to be buried, their faithfulness to Him who had taught them words of life came to the fore. And they joined the Mother of God to bring down the body of Christ and to bury him. Daringly they went to Pontius Pilate and asked for this body so that they could bury Him with veneration. In the course of His life they had been listening to Him with a hesitant yet open mind. When death came their faithfulness sprang to the fore. And seeing the pain of the Mother of God and St. John the apostle there was no doubt left in them; they must declare themselves, because they could not accept that He should be rejected through defeat after having been their teacher, their guide and their friend.

And then there is another group of people, the myrrh-bearing women, a group of women who had been following Christ and supporting Him and His disciples in their need. When Christ was crucified all the apostles fled, with the exception of St. John and with the exception of these women. It was not an intellectual conviction that held them as disciples of Christ. It was something which perhaps could be defined in the words of the pilgrims to Emmaus: ‘was not our heart burning within us when He was speaking to us on the way’. All the way from Galilee to Jerusalem, from the peace of the land to the tragedy of Jerusalem, all this time they had been listening and their hearts had come to life — not with personal love but with a deep sense of life eternal. These are the words which also St. Peter had said earlier, when most people who surrounded them had left, and Christ turned to his disciples and said: are you also going to go? And Peter said: where should we go? You have the words of eternal life. And these words were not simply syllogisms, or proofs, or ways of conveying things. When he spoke it was life eternal that was awoken in them — the door into eternal life that came to life. And they knew that these words were true because there was new life in them. And so was it also for these women.

So today we keep the feast of people who proved faithful, the ones who in their frailty had not fled, and the ones who in the face of defeat and tragedy had suddenly become disciples and faithful. Let us remember them, not only seeing their glory as we have done today in the service, but also asking ourselves: do we belong, to any extent, to the example given by one or another of them? Can we say that in the face of the defeat of Christ we would come out and say: I am one of His disciples, although in the time when there was no danger around I kept out, hesitant, unsure, asking myself questions, indeed asking Him questions? Is any one of us Joseph of Arimathea, is any one Nicodemus, and can we say that we are like these myrrh-bearing women, whom neither the needs nor the defeat nor the death of Christ had been able to alienate from Him?

None of us is any of it to the full; but let us learn from them and try to grow into that faithfulness which they have shown; the ones throughout the life of Christ, and the other ones in the face of His defeat. Amen.