The Doubt of St. Thomas

But Thomas, (who was called the Twin), one of the twelve, was not with them when Jesus came. So the other disciples told him, ‘We have seen the Lord.’ But he said, ‘Unless I see the mark of the nails in his hands, and put my finger in the mark of the nails and my hand in his side, I will not believe’.

1. Just as a casual and random belief is the result of an unduly relaxed frame of mind, so excessive curiosity and fastidiousness is the mark of a plodding brain. This is where Thomas was at fault. He didn’t believe the other Apostles when they said, ‘We have seen the Lord’; not so much because he mistrusted them, but because he couldn’t conceive of the truth of the resurrection from the dead. He doesn’t say. ‘I don’t believe you,’ but, ‘Unless I put my hand… I will not believe.’ But how was it, that when they were all collected together, he was the only one absent? 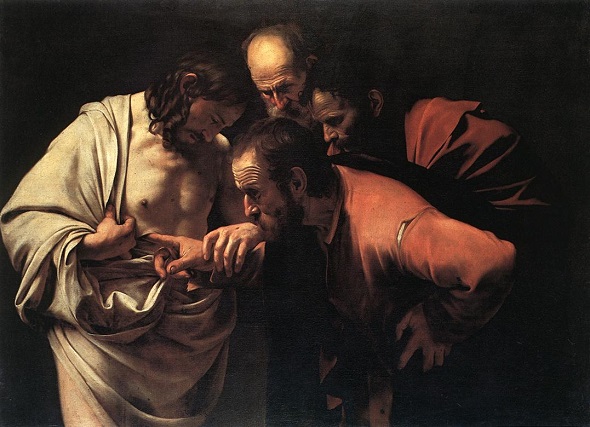 He probably still hadn’t returned after they’d recently scattered. But when you see the unbelief of the disciple, you should consider the loving-kindness of the Lord: how for the sake of a single soul He showed Himself with His wounds, and came in order to save the one who was more obdurate than the rest. This is why Thomas sought proof from the baser senses, and wouldn’t even trust his eyes; he didn’t say, ‘Unless I see,’ but, ‘Unless I touch’, as though what he saw might somehow be an apparition. The disciples who told him these things deserved to be believed, as did He Who had promised; yet, since Thomas desired more, Christ didn’t deprive him even of this.

And why didn’t He appear to him straight away, instead of ‘a week later’? (John 20:26)? So that, having been told over and over by the other disciples, and hearing the same thing again and again, Thomas’s desire might be kindled, and he’d be more likely to believe in the future. And how did Thomas know that His side had been opened? From having heard it from the other disciples. How, then, did he believe partly, and partly not believe? Because the event was so strange and wonderful. And I would also ask you to observe the truthfulness of the disciples, how they hide no faults, either their own or others’, but record them with great veracity.

So Jesus presented Himself to them, and didn’t wait for Thomas’ request, or any other preamble, but before he could, Christ cut him short, and fulfilled his desire. This shows that even when Thomas had broached the subject with the other disciples, Christ must have been present, because He quoted the same words. Speaking in a way that conveyed a rebuke and instructions for the future, He said,

‘Put your finger here and see my hands. Reach out your hand and put it in my side. Do not doubt, but believe’.

Do you see that his doubt came from unbelief? But this was before he’d received the Spirit; after that, it was no longer so, but, for the future, they were perfected.

This wasn’t the only way that Jesus rebuked him. He also did so by what followed. Thomas was finally satisfied, breathed again, and cried aloud,

‘My Lord, and my God.’ Jesus said to him, ‘Have you believed because you have seen Me? Blessed are they who have not seen, and yet have come to believe.’

This is what faith is about: accepting things not seen. ‘Faith is the assurance of things hoped for, the conviction of things not seen.’ (Hebrews 11:1).  And here He declares that not only are the disciples blessed, but so, too, are those who believe after them. ‘Yet,’ people might say, ‘the disciples saw and believed.’ Yes, but they sought nothing of the kind, but from the proof of the linen cloths, they accepted the news about the Resurrection at once, and showed the whole of their faith even before they saw the body. So if anyone says today, ‘I wish I’d lived in those times, and seen Christ performing miracles,’ they should reflect on the fact that ‘Blessed are they who have not seen, and yet have come to believe.’

It’s worth asking how an incorruptible body showed the prints of the nails, and could be touched by a mortal hand. There’s nothing to be concerned about here. What took place was by way of a concession. [The body] which was so subtle and light as to enter in when the doors were shut was free from all density. But this miracle happened so that the Resurrection should be believed; that people should know that this was, indeed, the Crucified Christ; and that nobody else had risen in His place. This is the reason He arose bearing the signs of the Cross, and also why He ate.

At least, the Apostles always made a point of this as a proof of the Resurrection, and said, ‘We, who ate and drank with him [after he rose from the dead]’ (Acts 10:41). When we see Him walking on the water before the Crucifixion, we don’t say that that body was of a different nature, but recognize that it’s the same as ours. By the same token, when we see Him with the imprints of the nails after the Resurrection, we won’t say that He’s therefore subject to decay. Because it was for the sake of the disciple that He presented these marks.