The Resurrection of Mankind (2)

Finally, the Lord’s Resurrection inaugurated and renewed the reconciliation of the imperishable with the perishable; it allowed the entry of uncreated divine grace into the earthen vessel, as of yore in paradise, so that, after his Resurrection, the Lord could enter the place where his disciples were gathered ‘behind closed doors’. They were talking about what had happened in Jerusalem; that the Lord had risen; and that he’d been revealed to them at Emmaus ‘at the breaking of the bread’. They thought they were seeing a ghost, but he calmed them and said: ‘Look at my hands and feet to confirm to yourself that it’s really me. Feel and be convinced, because a ‘ghost’, a ‘spirit’ doesn’t have flesh and bones as you see I have’. And so he showed them his hands and feet to convince them utterly. 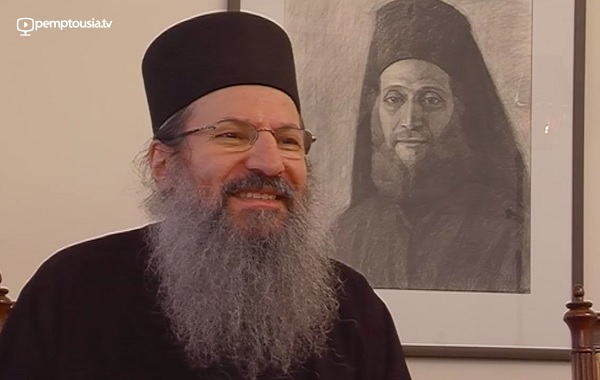 In the person of Christ, then, there coexists concurrently, without confusion or division, the created and the uncreated; the divine grace of the Holy Spirit within the temple of the body of Christ, who is both God and human, and, as a gift, by grace in the temple of  the body of us mere humans. In the natural world, the main, the swiftest, the most highly conducive element in its workings is light, which came into being at the word of God the Creator. In the spiritual world, that of the relationship and mutual communion between God and us, light is again the direct means. The light of the sun illumines nature, the true light of God ‘illumines every person who comes into the world’, so that, ‘in the light of the person of Christ’ we’re able to see the inaccessible, the immaterial light. Over the centuries, this light has sealed every divine manifestation revealed in the events and persons of the people of God. The light which Christ’s tomb, ‘more brilliant than any bridal chamber’, emitted at the hour of the Resurrection is the light of Christ’s person, it’s his own identity, it’s his wonder-working energy, it’s his grace, which stamps the life of all the saints, without exception, ancient and modern. In private conversation, the newly-canonized Saint Efraim Katounakiotis related that, in spiritual rapture, he saw Christ ‘in all his glory’. He went up to the top of the hill next to his kelli and shouted all around, even to the angels, to get out of the way and not to impede this vision of the divine light. And he wasn’t alone in this. Saint Païsios tells us that ordinary monks with pure hearts, who had lost their physical sight, could see the true light and that the whole of their surroundings- their kelli, the brooks and the dells- were full of the light of Christ. His Resurrection has bestowed upon us the unwaning, never-dimming light of Christ.

Our natural and, particularly, our spiritual senses are attuned to the divine light. Our nous and spirit are illumined; they understand and feel; they’re united and gain in power; and they begin the great task of approaching and knowing God. As another great saint, Nikolaj of Ochrid, says, people who are focused and at one with themselves have much power in this world; they’re resurrected. And Elder Aimilianos adds that this experience of receiving the light of the Resurrection is something ‘we feel as a reflection in the depths of our existence… but in essence we see the depth of the divinity of Christ… These are things bestowed by God not on the wise or the clever and so on, but on those who simplify their existence… and fix their internal eye on God. These are the people to whom God grants vision’.

Keeping the gifts of the Resurrection of the Lord as precious treasures, let us offer him, dear readers, a few words of prayer borrowed from the great poet, philosopher and saint, Nikolaj of Ochrid: ‘My faith sees you, Lord; this is the light and insight of my eyes…My hope is expecting you, Lord. Expectation of you is the sole content and only meaning for my tomorrow and the days thereafter… (I know that) heaven doesn’t fulfil hopes but Hope. Love makes me God and you, God, human!

The Lord is and becomes the Risen Lord, he’s my Risen Lord who raises the dead “from the morning until nightfall and from dusk to dawn”. What is more befitting to the living God than to raise the dead to life? Let others believe in a God who summons people and condemns them. I shall cleave to the God who raises the dead’.

The light has emanated from the tomb; come and take it. Now faintly, more intensely in the eternal day of the kingdom of God. Let us unite our voice with that of our holy Father, Saint John Chrysostom: ‘For Christ has risen from the dead, and has become the first-fruit of the departed. To him be glory unto the ages of ages. Amen’.