Encomium on All Saints – Part I

Not seven days have passed since we celebrated the holy feast of Pentecost and again we’re overtaken by a chorus of martyrs, or better, serried ranks of martyrs, which are in no way lesser than the ranks of the angels seen by the Patriarch Jacob but equal to and of the same worth as them. Because martyrs and angels differ only as regards the name, whereas in their works they’re united. Angels reside in the heavens, but so, too, do the martyrs. The former are eternal and immortal; the martyrs will become so. But have the latter assumed a bodiless form? What does it matter? Because the martyrs, even though they’ve got a body, are still immortal, or rather, before immortality, the death of Christ adorns their bodies even more greatly than immortality. The sky, be it adorned with ever so many stars, is not so bright as the bodies of the martyrs, which are made beautiful by the blood of their wounds. So, because they died for Him, they are, in fact, superior and have been decorated before achieving immortality, since they were crowned from the moment death. 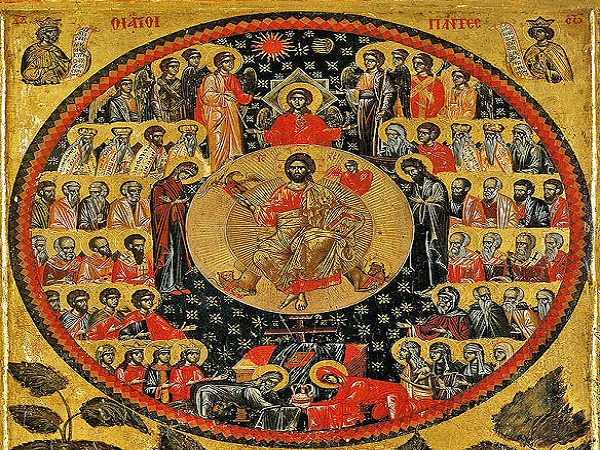 Do you see God’s wisdom? [Also a reference to Christ. Churches named Ayia Sofia (Holy Wisdom) are dedicated to the Lord. WJL]. How the worst disaster that could have befallen us (I mean death), was caused by the devil, but was changed by Him into honour and glory for us, bringing His athletes to the prize of martyrdom in this way? So what should we do? Thank the devil for death? Perish the thought. Because the feat was no work of his will, but a gift of the wisdom of God. The devil brought it upon us to destroy us and to bring us back to dust, expunging any hope at all of salvation. But, with His own death, Christ changed the whole course of things, and, through our own very death raised us again to the heavens. So let no-one blame me for calling the assembly of martyrs a chorus and a battalion, giving two opposite names to the same thing. Although ‘chorus’ and ‘battalion’ are opposites, here they’re united. Because they went to their tortures as if they were dancing with pleasure and, as if they were engaged in battle, they displayed all their bravery and stamina and defeated the enemy. Of course, if you examine the nature of what happened, it was a battle, a war and serried ranks. But if you look at the disposition of those who suffered, it was dancing, relaxation, feasting and the greatest pleasure.

Do you want to know how this was more terrible than war? I mean, regarding the martyrs. What, in fact, is the worst thing about war? On one side and the other, fortified camps are set up, shining with armaments that brighten the whole of the surrounding area. From all sides, they shoot volleys of arrows that, by their very numbers, hide the sky. Blood flows in rivulets onto the ground and there are heaps of corpses everywhere. Like stands of wheat at harvest time, soldiers are mown down. Now let me lead you into the other battle. Here, again, there are two opposing sides: that of the martyrs and the other of the tyrants. But the tyrants are armed to the teeth, whereas the martyrs are fighting with their bodies exposed. Yet victory belongs to the naked not to the well-armed.  How can you not be amazed that the person being scourged actually defeats the one who’s whipping him, the person who’s bound overcomes the one who’s free, the person being burnt defeats the one who’s doing the burning, or that the one who’s killed overthrows the killer? Do you see how the former are more terrible than the latter? The latter are, indeed, terrible, but in a natural way, whereas the former transcend natural means so that you may learn that their feats are from the grace of God. Even though there’s nothing more unfair than this battle. What’s more illegitimate than these contests? In war, you’ve got two sides that fight under protection, but the same’s not true here: one’s naked and the other armed. In the games, both contestants can raise their arms against each other: here, one’s tied and the other can strike freely. Those who judge, as if by some authority, appropriate to themselves the right to maltreat others, while the righteous martyrs are given the privilege of being maltreated. This is how they fought against the saints, though even so they couldn’t defeat them: after this unequal contest, once they’d been beaten, they retired. It’s like taking a soldier into battle, cutting off the tip of his spear, removing his body armour and then ordering him to fight with an exposed body. And then, despite the blows and multiple wounds he receives, the soldier’s the one who raises the trophy of victory.

The martyrs were, indeed, led naked, with their hands tied behind their backs; they were struck and cut from all sides and were thus overcome. But, despite their wounds they raised the trophy of victory against the devil. When you strike a diamond, it makes no impression, it doesn’t soften it, but rather ruins the hammer hitting it. Just so with the souls of the saints. Although they were tortured so greatly, they suffered no harm but dispelled the power of those who were striking them. The martyrs were tied to planks of wood, their sides were pierced, opening up deep rivulets, as if the earth were being ploughed, though without their bodies being cut up. You’d see loins ripped open, ribs pierced, breasts crushed, and the bloodthirsty beasts didn’t even stop at this. When they took them down from the wood, they stretched them on iron grills above burning hot coals. Then there were even worse things to see than we mentioned above: two sets of drops, of blood and from the melting of the flesh. But the saints were lying on the grill as if it were a bed of roses and watched what was going in with great satisfaction.

Now when you hear ‘iron grill’, turn your mind to the notional ladder that the Patriarch Jacob saw extending from the earth to the sky. There were angels descending it and the martyrs ascended, with the Lord supporting all of them.  The saints couldn’t have borne such pain had they not been supported on the ladder. So the angels ascended and descended and the martyrs ascended. Why is this? Because the angels were sent to serve those who were to inherit salvation, but when the martyrs departed as victors and athletes, once they were free of the contest, they went thereafter to meet the master of the games.