The Path towards Pentecost and the Last Times

The season after Easter is called ‘Pentikostario’. After the victory over death which was ushered in by Christ’s Resurrection, we go on to the great feast of Pentecost. Fifty days after Easter, we celebrate the descent of the Holy Spirit onto Christ’s disciples and, through them, onto all of us. This ‘descent’ had been foretold by Christ while he was yet on earth.

The feast developed over time. Initially, it was agricultural; later it ‘commemorated’ the historical event of the Testament; then it finally became the feast of the gift of the Holy Spirit, which inaugurated the new Testament on earth. 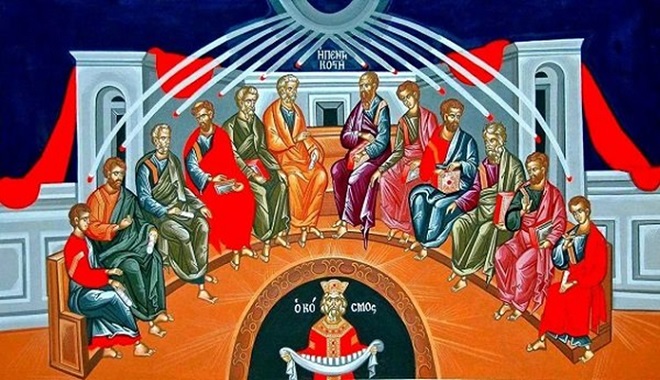 Along with the Passover and Tabernacles, it was the third great feast of the Jews, at which every believer was obliged to travel to Jerusalem and take part in the services there. As we’ve already said, it was originally an agricultural feast, that of the harvest (Ex. 23, 16). It was when the first-fruits of the produce of the earth were offered (Ex. 34, 22).

Thereafter, the feast became an anniversary. The Testament  was drawn up fifty days after the exodus of the Israelites from Egypt. (Ex. 19, 1-6), which was when the Passover was celebrated. It appears from documents discovered at Qumran and from what the rabbis recorded that the feast was established in the second century B.C.

The Prophet Joel describes the outpouring of the Holy Spirit over the whole world. The Spirit is depicted as wind and fire and is given a place as an extension of the theophanies of the Old Testament.

In the New Testament we have a clear reference to the coming of the Holy Spirit to the Apostles, in the form of tongues of fire (Acts 2, 4). The disciples spoke in foreign tongues and thus proclaimed the prospect of the Gospel spreading throughout the world and its universal mission. The division of nations which occurred at Babel (Gen. 11, 1-9) now found its ‘cure’  through the unity of Pentecost. Through the Holy Spirit, Christ gave strength to his disciples and their successors, invested them with gifts and fortified them, so that they could speak of what they’d seen and heard and what their hands had felt: ‘But you shall receive power when the Holy Spirit has come upon you; and you shall be witnesses to me in Jerusalem, and in all Judea and Samaria, and to the end of the earth’.

When there’s a reference to the expression ‘baptism in the Spirit’, the Fathers of the Church speak of the assignment of missionary authority to the Church. They claim that Pentecost is the new Law. It’s the opportunity for the whole world to be recreated. Provided we’re receptive, the gift of the Holy Spirit can renew us just as it can renew the world as a whole. The Holy Spirit is banked away in the Church’s coffers. That’s where we find him. That’s where the faithful receive him as a gift, through the holy sacraments, provided, of course, we’re open to such an experience.

Finally, the gift of the Holy Spirit characterizes the last times, a period which begins with the Lord’s Ascension and will be completed on the ‘last day’, when Christ will return at his second coming.