The Gospel reading for the day refers to the miracle of the man possessed who was cured by Christ. The event attracted the attention of three Evangelists, Matthew, Mark and Luke, doubtless because of the great impression caused by the cure, the consequences which followed the expulsion the demons and the profound effect it had on a large number of people in the region of Gergesa and Gadara.

The distortion of the person

The Evangelists Mark and Luke don’t present a generic or hypothetical image of the tragic effects of demonic influence. They particularize and personalize the issue. They mention a specific person, who not only bears the obvious external signs of collapse, but is also a man who, internally and spiritually has been distorted to such a degree that he’s lost the basic ontological features which constitute human consciousness and existence.

When the man possessed is asked by Jesus what his name is, he answers ‘Legion’, with no awareness of his personal entity or existence. The explanation for this is that ‘many demons had entered him’. The man isn’t merely unaware of his deeds and actions, but he doesn’t even know his name. He doesn’t know who he is, what he wants or what he does. Complete disintegration and distortion of his personality. 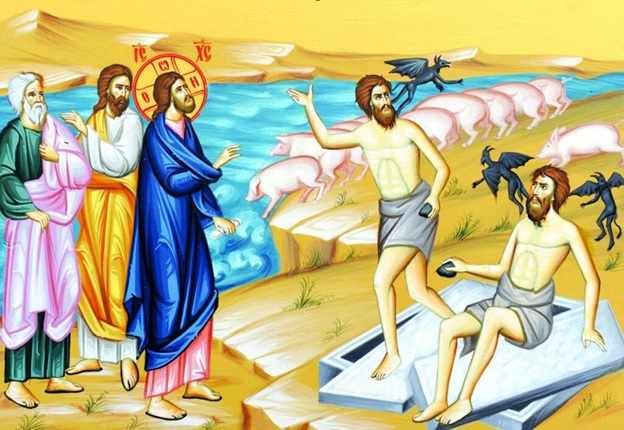 There are many people who are carriers of the demonic spirit. They behave and act with no awareness of their deeds. Although they’re good by nature, their deeds and actions are destructive, both for themselves and others. They often reveal some destructive force that’s covertly leading them into trouble. They act irrationally, absurdly and strangely. Without question, they’re in need of being cured. And this cure can’t always be traced to the rationale of the necessity for medical psychotherapy. There needs to be an internal repentance, modification and conversion. A miracle is required to effect the release from demonic influence and its effect on people.

When wickedness is embedded in people’s hearts in a diabolical manner then the destructive consequences affect them in an all-embracing way. Each day we see these effects increase in intensity as they become more obvious to others. The people concerned have no awareness of the badness they carry with them and the harm they do. The catastrophe sweeps away both their body and soul; it ravages the people themselves, their friends and their family. Everything is tossed about in the maelstrom of disintegration, as was precisely the case of the man possessed who is described in the Gospel.

The man of cure and miracle

This weak and feeble man, under the influence of all that is evil and demonic, is familiar to us from history, from everyday life, from the fall and from spiritual sickness, as the Fathers of the Church tell us. The picture he presents and the terrible consequences of his fall are of no surprise to us; in fact they’re more likely to be well-known and familiar to us. In different forms, we also live with this distortion. What’s needed is a cure. And the cure for spiritual wounds is effected only by a miracle, by the intervention of Christ in our life.

And, indeed, this is the solution to the problem that today’s Gospel presents and which the Church offers the faithful. We see this in the case of the man possessed and in all those who are possessed. After the performance of the miracle, that is the expulsion of the demons, the man who didn’t have a name nor any awareness of who he was sat at Jesus’ feet, clothed and in his right mind. He’d become conscious of who he was, he knew what he wanted, he welcomed the Lord’s message, believed in divine intervention, was cured and would soon tell the world of his salvation. This is why the Church considers him an apostle to the pagan region of Decapolis, to a people who, even without theological training, welcomed the Lord’s message more readily than the Jews, who were ‘sons of Abraham’ by heritage.

The conclusion of the narrative in the Gospel according to Saint Mark is that, after his cure by means of a miracle, this insignificant, abused person, who had ruined his own life and was a threat to others, who had turned the nature of life upside down and lived in chains among the tombs, moving about only at night, keeping clear of people and the society of the sons of men, this same man ‘began to preach in Decapolis all that Christ had done for him. And everyone was amazed’. What is improbable or impossible for people, became feasible within the new reality of the miracle.

Each of us bears our own wounds, we each live with the impossibility of overcoming our weaknesses. We’re often ashamed of the image we present to others and we’re frequently under the influence of the ‘unclean spirit’. What we have to understand is that there’s no other solution or possibility than the intervention of God in our life. It’s necessary for miracles to happen in our personal life and for us to welcome them.

We saw today one of the most tragic instances in life. A man distanced from God, not only utterly confused and sinful but also possessed. A man without a personal history, without a past and with a tragic present; everything dark and in flux. A life without friends, without loved ones, without people around him, without hope and without God. Alone with his sickness, alone with his darkness, alone with death and with his demons. There’s no more distressing image of a life destroyed than that presented in the Gospel.

But today’s Epistle reading sheds light onto the profound darkness. It opens an escape route from the bonds of sin and of the devil. Saint Paul tells us that even if people fall very low and descend into the abyss of Hades there’s hope of redemption and resurrection. Christ comes down even into Hades in order to meet you. It was there in Hades that his resurrection occurred. There in your own Hades, life will come to meet you.

Saint Makarios the Egyptian adopts an existential approach to these matters. He emphasizes that the Hades into which Christ descended, where he shattered the tombstones and where he cried aloud, as he did to Lazarus: ‘Arise and come forth’, is your own personal being. Christ destroys your own Hades and demolishes the consequences of death for you.

The demonic powers are a reality. They remain invisible forces until the tragic consequences of their interference becomes obvious. They enter people’s lives and cause catastrophic developments in history. It’s not uncommon for people to fall under the sway of demonic powers. When the world gets rid of God, his place is taken by the demons. In this way, our life becomes a hellish wilderness. According to Saint Matthew the Evangelist, from having been the abode and temple of God, the world becomes the tabernacle of the demons. People are divided, they become aggressive and hostile, their ambitions and cultures are demonized and humanity is beguiled into destructive wars. When people and their life are without God, they bring history into the ultimate cul-de-sac, Hades. Hades is destroyed only by God and we should understand this once and for all.