The Call of the Disciples

In the Gospel reading for the 2nd Sunday of Matthew, Jesus invites the first four disciples to follow him. These were Peter, Andrew and the brothers, James and John. In the Gospels, it appears that Christ called these disciples twice: the first time was by nature of a trial and the second was definitive and occurred during the period after John the Baptist had been killed by Herod. The call described in this Gospel reading is the second, which, as we’ve said was conclusive. 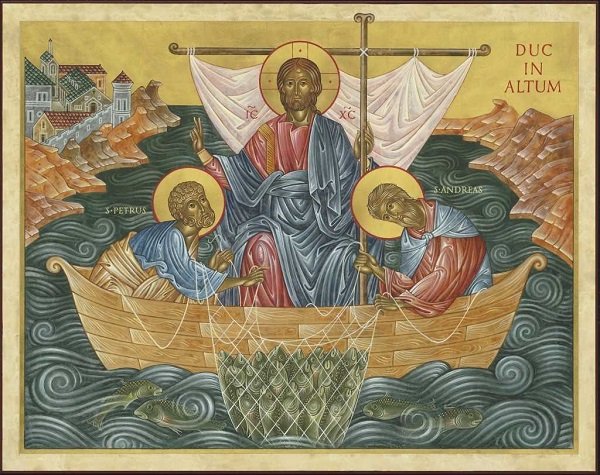 The Apostles’ standard of living

Who were these fishermen whom the Lord called to be his disciples? They were humble, illiterate and socially insignificant. They didn’t belong to the class of the Scribes and Pharisees. Archbishop Basil of Seleucia observes that: ‘in looking for people to instruct the world, the Lord ignored towns, municipalities and kingdoms. He turned away from people of wealth, the orators- “he hated the domain of the orators”… The manner in which the Lord called the Apostles seems to be saying to people: “I’m looking for fishermen, not kings”’. Matthew said that he found them: ‘in the ship with Zebedee their father, mending their nets’. They were mending their nets because they couldn’t afford to buy new ones, according to Saint John Chrysostom. They were people who loved each other. They fished together and mended nets together. Father and sons worked together and had a common characteristic: ‘they lived off their own labors’ (Chrysostom). They may have lacked formal education but they were distinguished by the virtue of love. The Lord didn’t call the unemployed for the task of preaching the Gospel to people, but hard workers. And they left everything behind, because they had trust in the person of Christ.

The call of the disciples demonstrates the power of God

The Lord chose for his disciples those whom the world disregarded. As Saint Paul pithily remarks: ‘But God has chosen the foolish things of the world to put to shame the mighty’ (1 Cor. 1, 27). The Lord chose them in order to show that the dissemination of the Gospel wasn’t the result of human power and wisdom, but of God’s power and grace, ‘that no flesh should glory in his presence’(1 Cor. 1, 29). The response of the disciples was spontaneous and absolute: ‘They left their nets, the ship and their father’ (Matth. 4, 22) and followed him. They’d seen no great miracles from Christ, nor heard any significant sermons and yet they recognized and understood the person of the Lord and sacrificed everything for him.

The faithful are inseparably bound only to Christ

Christians should not be linked to any thing or person in this present life as much as they are to Christ. The Lord has the first word in our life. The Church doesn’t encourage us to abandon our homes, our belongings and our families. But it does want us to love Christ more than we do material goods and our loved ones. It wants us to have a vital relationship with Christ. Our bond with Jesus shouldn’t be restricted to an intellectual relationship, to an ideology. It should be living and expressed in prayer, in our participation in the sacraments and, if the need arises, in public confession and in the sacrifice of some of our favorite things.

Nowadays, fishing for people is thriving for a number of reasons. People go fishing very skillfully, in order to serve political, social, ideological, quasi-religious and even very base purposes. Nowadays people are being actively regimented by a campaign for self-reliance and profit. Lots of ‘messiahs’ have appeared with demands that other people should submit to them. Personal ambition is the order of the day. We demand devotion and obedience from others, in order to satisfy our passions, which, often enough, are despicable. It’s only obedience to Christ that benefits us in multiple ways. It makes us peaceful towards others, without surrendering to petty interests and material enjoyments. It makes us worthy people and highlights our gifts and virtues. It leads us into the Kingdom of God, where we will live eternally with Christ, who loved absolutely and with his whole heart.