The Feast of the Transfiguration

In the biblical narratives of our Lord’s Transfiguration it is easy to discern different points of inclusion and emphasis peculiar to each writer. Only Luke, for instance, mentions that Jesus was praying when He was transfigured, and only Matthew remarks that the disciples “fell on their faces.” 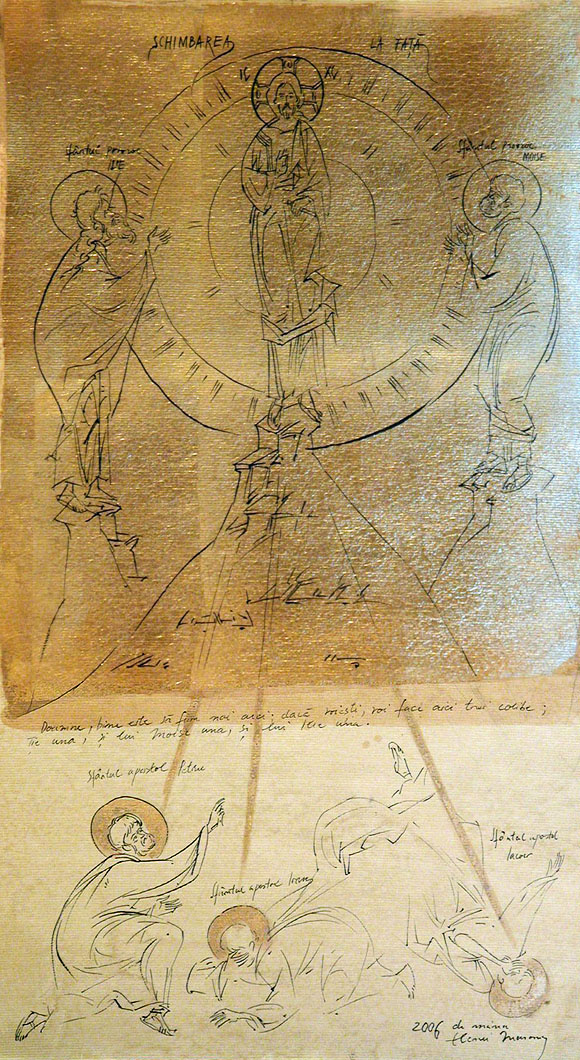 The Transfiguration. By hand of Elena Murariu

In Mark’s account (9:2-10) one of the most notable features of the Transfiguration is the curious way the evangelist speaks of the arrival of Moses and Elijah. Whereas Matthew and Luke say simply, “Moses and Elijah appeared” on the scene, Mark lays a special stress on Elijah. He writes, “Elijah appeared to them with Moses.” Not only does Mark mention Elijah before Moses, but the verb he uses, “appeared” (ophthe), is singular, not plural. His is an account of the arrival of Elijah, Moses playing a rather secondary role.

Why is Elijah so prominent in Mark’s story of the Transfiguration? This emphasis can hardly be insignificant. To throw light on this question, I suggest three steps.

First, let us observe that Mark’s version of the Transfiguration is followed immediately by a question about the return of Elijah. Speaking of the three apostles that had just witnessed the scene, Mark writes, “And they asked Him, saying, ‘Why do the scribes say that Elijah must come first?'”

As it stands in Mark, this question strikes one as curious, a bit odd in context. Why, right between the Transfiguration and the healing of the little boy at the bottom of the mountain, do the apostles suddenly become inquisitive about the return of Elijah? It is rather strange.

Second, if their question is rendered odd by its context, perhaps we should look more closely at that context. What I propose to do here is remove the Transfiguration from Mark’s story and have a look at the context without it.

If this procedure seems strange, let me explain. I don’t intend to alter or rearrange the biblical passage. On the contrary, I simply want to understand how the Transfiguration story is set within its context in Mark. This is why I want to examine that context without the Transfiguration. This is something in the order of picturing a ring without its gem, which is a perfectly reasonable thing for a jeweler to do.

“And He said to them, ‘Amen, I say to you that there are some standing here who will not taste death till they see the kingdom of God present with power.’ And they asked Him, saying, ‘Why do the scribes say that Elijah must come first?’ Then He answered and told them, ‘Indeed, Elijah is coming first and restores all things. And how is it written concerning the Son of Man, that He must suffer many things and be treated with contempt? But I say to you that Elijah has also come, and they did to him whatever they wished, as it is written of him.’”

We immediately notice that this narrative sequence flows more logically (if this is the word I want) than the actual story in Mark. The apostles’ question about the return of Elijah no longer seems odd or abrupt. It appears, rather, as a natural and expected response. The Lord predicts, “some standing here who will not taste death till they see the kingdom of God present with power,” and the disciples answer, “Well, all right, but isn’t Elijah supposed to come first?” That is to say, the narrative sequence makes perfect sense without the Transfiguration.

We see, then, how the Transfiguration story functions in the sequence of Mark’s narrative. Its position serves to answer a question about Elijah’s return. He came back at the Transfiguration! In the theology of Mark, Elijah’s arrival at the Transfiguration of our Lord places that event into the context of a specific prophecy abut Elijah: “Behold, I will send you Elijah the prophet before the coming of the great and dreadful day of the Lord” (Malachi 4:5).

As the story flows in Mark, moreover, this appearance of Elijah at the Transfiguration scene not only fulfills the prophecy of Malachi; it also identifies this prophet’s “day of the Lord” with the Resurrection. We see this very clearly in Mark’s sequence, where the question about Elijah expresses the apostles puzzlement about the Resurrection. Mark writes, “Now as they came down from the mountain, He commanded them that they should tell no one the things they had seen, till the Son of Man had risen from the dead. So they kept this word to themselves, questioning what the rising from the dead meant. And they asked Him, saying, “Why do the scribes say that Elijah must come first?”

Finally we may comment that this Markan emphasis on Elijah in the Transfiguration story is very different from that in Matthew and Luke. Although Matthew (17:1-12) follows Mark in the sequence of these two stories, he does not give a special emphasis to Elijah in the story of the Transfiguration. On the contrary, he adds an explanatory note that symbolically identifies Elijah with John the Baptist (17:13). Luke, who makes the same identification (1:17), completely omits the apostles’ question about the return of Elijah from the story of the Transfiguration.

Although the full meaning of Elijah’s return has never been completely settled in Christian theology, it is worth remarking that St. Ambrose followed Mark’s lead in seeing the fulfillment of Malachi 4:5 in the Lord’s Transfiguration (De Virginibus 1.3.12).