In this Sunday’s Gospel reading, we have two events. One is the healing of the two blind men and, thereafter, the cure of a man who was both dumb and, at the same time, possessed. Both instances are extremely tragic, as presented by Saint Matthew the Evangelist, not only because of the bodily suffering involved but also on account of the deeper spiritual dimension which is given to their illnesses. The Gospel extract ends with the observation that Jesus ‘went through all the towns and villages’, essentially performing the task of salvation by ‘teaching’ and ‘preaching’, but also ‘healing all sickness’. Jesus work is complex and multi-faceted.

The meaning of ‘to heal’

The third element in Christ’s work was the cure of ‘every sickness and illness’, that is all the ailments and weaknesses to be found in the life and history of a people. The meaning of the mission and incarnation of the Word isn’t exhausted by his teaching and preaching, by some kind of theoretical understanding of the revelation of the plan of divine providence. The practical and empirical element is also necessary. The task of performing miracles completes the image we have been given of the mission of Jesus Christ as redeemer and savior of each person and of humanity as a whole. 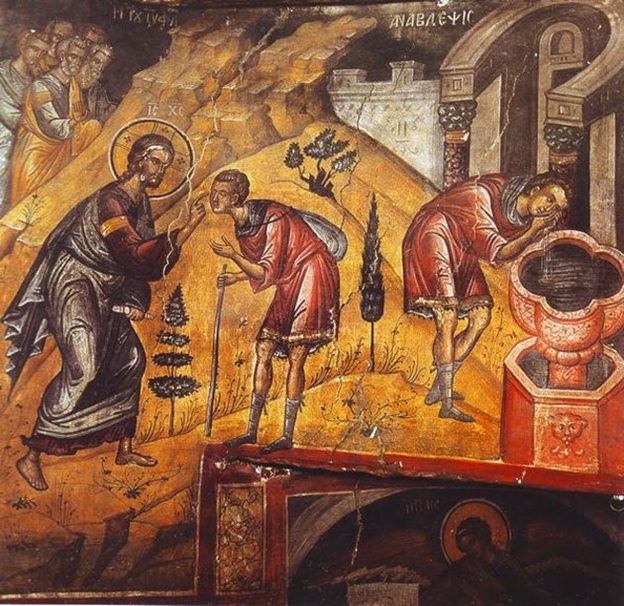 It’s indicative that, after every missionary effort and at the end of each sermon, the sick and suffering would come to him to be cured. The miracle almost always comes as confirmation of Jesus’ authority over body and soul, over human beings and nature. This is exactly what happens in today’s Gospel reading. After the sermon and the teaching comes the miracle: ‘having said these things to them, behold…’, the sick come to be cured. In this case, ‘as Jesus went on from there’, two blind men appeared, crying aloud: ‘Have mercy on us, Son of David’. And again, ‘after they left’ the place of teaching, ‘behold, a dumb man who was possessed was brought to him’.

The focus of interest in both these instance is significant: blindness and deafness under the direct influence and domination of a demon. Jesus often ended a sermon with the exhortation to people to open their eyes and ears in order to see and hear God’s truth. And a miracle is a way to the sole truth, since it’s a path to life itself.

A dominant feature in both cases of these miracles was the sick people’s trust in the person and work  of the Lord and also the amazement of people at his power to crush the dominion and authority of ‘the demon’. The results of all this, of his teaching mission and the miracles, were, in the end, the consolidation of the new Gospel message and the inauguration of the kingdom of God. The work and mission of Jesus Christ was accomplished by preaching, teaching and the performance of miracles. Any attempt to separate these three basic elements and to prioritize one over the others, isn’t simply a great mistake, but also distances us from a proper understanding and experience of the work of the Lord for our salvation.

Unfortunately, many people see Christianity as merely an institution for instruction and edification, which has played  an important cultural role in the history of humanity, while others believe that the Christian faith is, by and large, enshrined in certain theological dogmas and moral precepts for life. In extreme instances, many believe that the Christian religion can be validated only in the personalities of wonder-workers actions involving the use of certain impressive, charismatic powers. These one-sided views certainly lead to error.

The truth of Christ is to be found only in the unity of the ministry of teaching and preaching, as well as faith in and experience of miracles. And this on the part of each one of us.